While the central government claims that revocation of Article 370 has reduced violence in Kashmir, recent attacks and data show a different story. Our exclusive report from Kashmir covering how militant strikes continue to rise in the Valley.
Srinagar, Oct 16: On 6th of August 2019, a day after government of India scrapped Article 370, Home Minister Amit Shah claimed that the removal of J&K’s special status would propel economic growth and consequently reduce militancy & insurgency.
However, two years down the road the local young boys continue to pick up guns while militant activities have intensified in the region, contesting the government claims.

According to the figures revealed by J&K police, 30 civilians have been killed in Kashmir during the current year amid a series of targeted attacks last week. During 2nd October to 7th of October militants have shot dead 7 civilians in the valley, triggering panic in the region.

Inspector General of Police, Kashmir Zone, Vijay Kumar said that out of 30 civilians killed during this year, five persons belonged to local minority Hindu & Sikh community & four were non-local labourers.
At least four Kashmiri Hindus, also known as Pandits, were killed by militants last year, and three in this year. Such killings have raised apprehensions among others who didn’t leave the Valley during the 1990s.
Nearly 100 Kashmiri Pandit families had temporarily moved out of Kashmir to safer locations like Jammu and other parts of the country where they have houses or relatives.

There is a huge fear of the return of the 1990s’ scenario, although the union territory administration has asked the minorities not to panic.

Those staying behind have been provided with tight security. In many cases, security officials have issued verbal instructions to such families not to venture out after dark.
Of the 30 civilians killed this year, the highest – 10 – are in Srinagar. Awantipora has the second highest at nine, and Anantnag and Sopore police districts reported four civilians each.
Last year, 37 civilians were killed, and in 2019, as many as 39 civilians were killed in spate of militant attacks.

A comparative look at the data

According to South Asia Terrorism Portal, the total number of militancy related incidents recorded in J&K in the year 2014 was only 240 compared to 353 this year.

Gunfights between militants and security forces have also intensified in J&K’s summer capital Srinagar where 18 gunfights took place since last year. Previously only six gunfights had taken place in the district between 2016 and 2019.

Police sources said that so far this year nearly 150 militants were killed in different encounters with security forces in J&K, contesting the government claims that “militancy is on decline”.
Similarly, last year’s first six months in J&K saw the highest number of militant killings, 143, compared to 120 in the corresponding period in 2019 and 108 in 2018.
In 2020 throughout the year 227 militants were killed, an increase of 45 per cent from 2019 when 152 militants were killed. This contradicts the union government’s claim that revoking Article 370 was effective in combating militancy.

The data gathered by The Stories of Change reveals that 213 militants were killed in 2017. In 2016, a total of 165 militants were killed compared to 108 in the year 2015 and 110 in 2014.
Since August 2019, 23 Bharatiya Janta Party (BJP) leaders and workers have also been killed in J&K. In Kulgam district alone 9 workers of the BJP have been killed.
After August 2019, there was a looming fear of locals losing sole rights over jobs and land. The recent attacks seem to have been carried out to send a message that Pandits and outsiders are not welcome.
In 2019, for example, six migrant construction workers from West Bengal were killed by TRF militants in south Kashmir’s Kulgam to create a fear among the non-local work force.
The Resistance Front (TRF), an offshoot of Pakistan militant outfit Lashkar-e-Taiba & Jaish-e-Mohammad (JeM) claimed responsibility for the recent killings, including the killing of a prominent pharmacist Makhan Lal Bindroo, a Kashmiri Pandit.
The TRF outfit in its statements has repeatedly used the fear of “demographic change” to target such individuals.

Last year in June, weeks after the central government introduced a new domicile law for J&K, TRF threatened to kill non-Kashmiris if they try to settle down in Kashmir under the new domicile law.
TRF emerged in the aftermath of August 5, 2019, when the Central government stripped Jammu and Kashmir of autonomy under Article 370 and split the state into two Union Territories, J&K & Ladakh.
According to security officials, the religion-neutral name adopted by the outfit is aimed at creating an impression that the group’s actions were a reaction to the Article 370 move by New Delhi and provide cover to Pakistan which has been warned of blacklisting by the Financial Action Task Force (FATF) for supporting non-state actors. 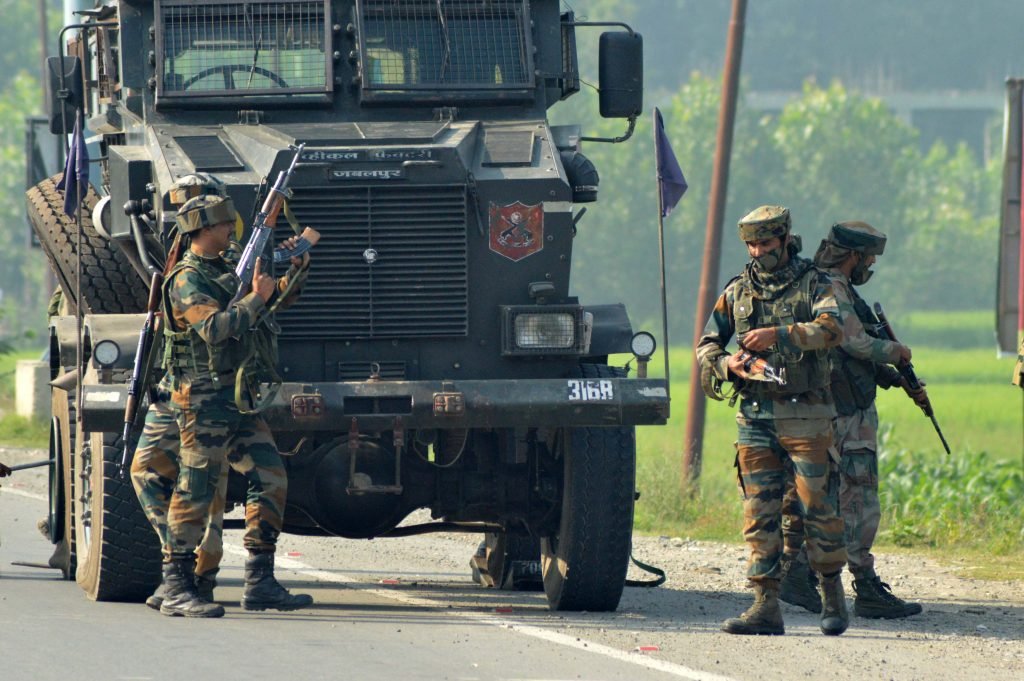 According to police sources, 163 local youths had joined the militant ranks in 2020. This year so far more than 100 militants have been killed in the Valley.

Despite losing top commanders, the militant outfits still find strength to carry out attacks on security forces and civilians across the Valley.

Even as the government claimed that all parameters show declining levels of militancy in Kashmir, but frequent attacks on civilians and political workers offer signs that the militancy still remains a potent threat, two years after the abrogation of Article 370.

Shortly after the killing of Bindroo and two other civilians earlier this month, former Chief Minister and president of the Peoples Democratic Party (PDP), Mehbooba Mufti, said the Government of India’s fake narrative of normalcy lies in tatters with the recent spate of civilian killings in the Kashmir Valley.

She further said that the Union government’s claim of building a “Naya Kashmir” (new Kashmir) has actually turned it into a “hell hole”.
“Its [the Union government’s] sole interest is to use Kashmir as a milch cow for its electoral interests,” she wrote on Twitter.
Later, when two school teachers were killed by militants in Eidgah locality of Srinagar, Mufti took a jibe at BJP government stating that it was the government at the Centre and their wrong policies adopted in J&K post August 5, 2019, that are directly responsible for the fast deteriorating situation in Kashmir.
“BJP government and its wrong policies adopted since August 5, 2019 and before that as well, are directly responsible for the fast worsening situation in Kashmir,” Mehbooba told reporters outside slain school principal Supinder Kour’s Aloochibagh residence in Srinagar.

On October 7 militants gunned down Kour, and her colleague Deepak Chand, a resident of Jammu inside Government Boys School, Eidgah Sangam in Srinagar.

Even J&K Bharatiya Janata Party General Secretary (Organization), Ashok Koul, termed the killings “barbaric” and questioned security forces for their failure in stopping such attacks. “It is unfortunate that security agencies have failed to thwart such attacks in the Valley, particularly in Srinagar,” Koul said in a statement.
The statement further reads, “It is a clear security lapse from the government’s end as seven civilians have been killed in Kashmir in the past five days.” He questioned why the police and other agencies failed to safeguard the lives of common citizens.
Reacting over the civilian killings, all India Congress Committee In-charge for Jammu & Kashmir and a Member of Parliament, Rajni Patil said that the ongoing situation in Kashmir has exposed the fake claims of normalcy often being made by the Government of India.
Talking to reporters after visiting the residence of slain Muhammad Shafi Dar at Naidkhai, Bandipora in north Kashmir, who was shot dead by militants last week, Patil said that coming here, she feels that the situation of 1990 is being repeated as innocent people are being shot here and the claims of normalcy that are being made by BJP government here are proving hollow.
The Peoples Alliance for Gupkar Declaration (PAGD), an amalgam of various political parties fighting for the restoration of Article 370 said the current situation prevailing in J&K is the result of the failure of the policies of the government.

“Whether it was demonetization or removal of Article 370, these decisions were sold to the country as a solution to the problems of militancy and alienation in Kashmir. Today it has been shown that without any doubt that neither demonetization nor the removal of Article 370 have contributed to improving the security situation in J&K,” the conglomerate of mainstream political parties said in a statement.

The amalgam said “some recent decisions of the Jammu & Kashmir administration have only served to heighten differences between the communities that otherwise were living peacefully amongst each other”.
“These killings have created a climate of fear that has not been seen in Kashmir since the early 90s,” the statement reads.
In the wake of a series of civilian killings in the past one week in Kashmir, PDP even demanded Lieutenant Governor (LG) Manoj Sinha’s resignation.
Addressing a press conference at the party headquarter, PDP Suhail Bukhari said that the LG has lost his moral authority to continue his job in the erstwhile state following the recent killing of the civilians in the valley.
“For the past two years, MHA has been directly controlling the security situation in the valley. And look what it has led to us today. No Kashmiri is feeling safe today. The situation has worsened here. “We demand the immediate resignation of the LG,” Bukhari said.
He added that the onus lies on the Government of India and its administration for the deteriorating security situation in the valley.