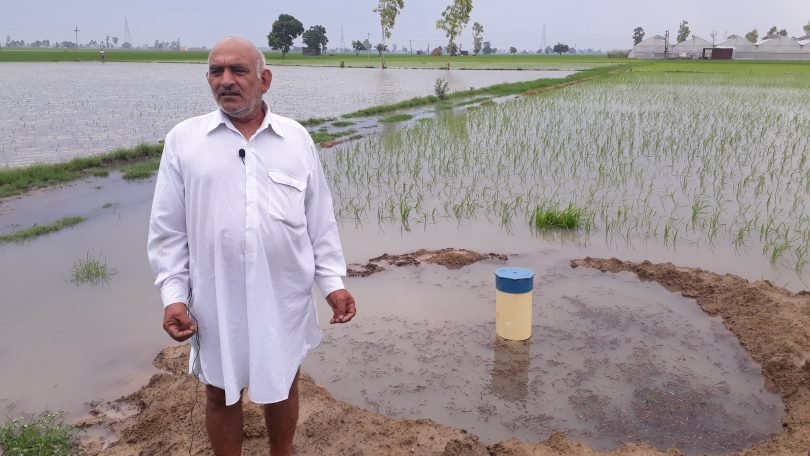 Every year, hundreds of farmers in Karnal, Haryana lost their crops and suffered heavy losses as their crops submerged underwater during monsoon. A farmer came up with a unique yet simple solution that saved farmers’ crops from getting damaged.

Bhajan Lal Kamboj, a 45-year-old farmer from Ramana village near Tarori of Karnal district, Haryana dropped out from school after grade eight and started farming from a young age. One day, when he witnessed the standing paddy crops of his farm submerged under rainwater in monsoon season, he was worried.

This was a normal thing in Karnal, also known as the ‘rice bowl’ due to a large amount of cultivation of paddy here. With the water level in the nearby flowing Yamuna river increases, districts like Karnal are put on high alert. Hundreds of farmers lose their crops every year due to this excess water.

To solve this issue for good, he came up with a unique idea. He installed a water conservation system in his paddy fields and reaped positive results. The solution not just saved his crops from damage due to excess flood water, but also helped in conserving that excess water efficiently. 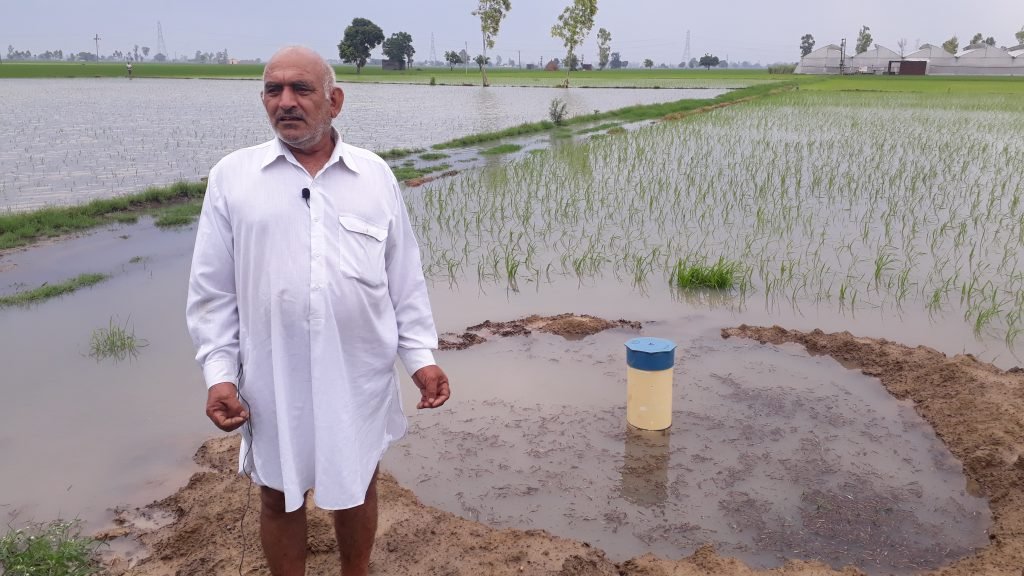 He then started promoting the idea to other farmers of the district and around. Soon, two other farmers from his village installed this self-made system and saved their standing crops from the excess rainwater fury.

The word of mouth was quick to follow and many others from nearby areas started visiting to check how the system works.

How does the system work? Bhajan Lal Kamboj is spreading awareness about water conservation from 2016 by meeting farmers.

The solution is simple yet effective. The farmers dig a deep pit on their lands and install a pipe of similar length in the pit. The system facilitates water to seep deep down easily. This prevents water logging and raises the water table.

The installation costs between Rs. 60,000 to 70,000. Once installed, Bhajan Lal claims that it seeps down excess water from more than 100 acres in a matter of six to seven hours.

Things are different now for Bhajan Lal. Ever since he has installed the water harvesting system, he doesn’t have to bear these losses anymore.

“Besides facing loss in my four acres of land, I used to bear a loss of over Rs 50,000 per acre leased from other farmers every year. Monsoon rain would give me jitters,”  Bhajan Lal told The Stories of Change.

The water conservation system on his farmland is 250 feet deep, in which 175 feet long pipe has been installed so that water can easily seep down.

Last year, his nephew Narinder Kamboj installed this system in his fields, which helped him save the standing crops from being submerged in water in the last two seasons. 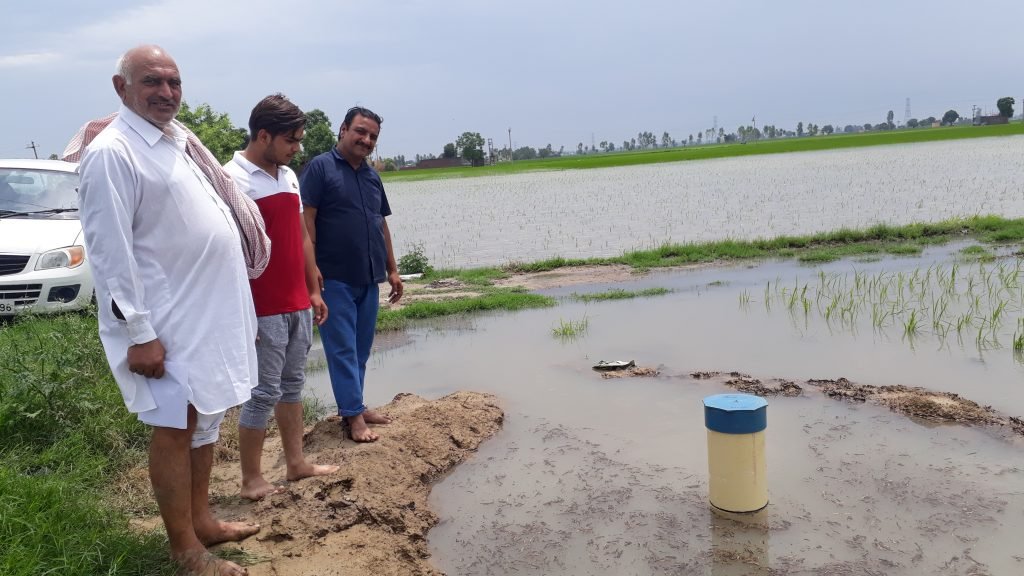 Scores of farmers come to visit the field of Karnal farmer Bhajan Lal to see harvesting system installed by him at his fields.

Another farmer, Narinder Kamboj’s fields are located in low-lying area. This causes crop damage in his eight-acre farmland during every monsoon in every monsoon. When he installed this rainwater harvesting system on his farm, he did not suffer any damage or loss during this year’s monsoon.

The inception of the idea

He said that got the idea back in 2016 when Prime Minister Narendra Modi urged people to conserve water. Bhajan Lal then printed leaflets and banners to spread awareness about the same among other farmers.

“I did not leave any farmers fair where I did not hang my banner for this purpose”, he said.

According to him, the government, which is dealing with the acute fall in the groundwater table in the region–seven blocks of Karnal district fall in the overexploited category–should help farmers like him to install such a system by supporting them financially.

He said that he receives dozens of queries every day from farmers who are interested in installing this system. However, a lack of funds and no support or subsidy from the government restricts his efforts.

“I tell all the villagers to take this installation as an investment for the future, otherwise the day is not far when Haryana would turn into a desert zone as said by Haryana Chief Minister Manohar Lal Khattar,” he added. Suresh Madan, another farmer from Karnal said that he would get it installed in his fields at the earliest.

“It is easy, not very expensive and filters are attached with the system to avoid waste material go inside the water table. I find it completely safe”, he said.

Sharing the video of one of the Karnal farmers, Union Minister of Jal Shakti, Gajender Singh Shekhawat lauded the initiative and called it a big effort to raise the water table and pump out excess rainwater for farmers.

Tajinder Singh Teji, member of Pond, Waste Water Management Authority, Haryana, said that he had visited the fields of Ramana village farmers and was impressed to see their initiative to unclog rainwater and improve water table simultaneously.

He said that the farmers’ successful efforts have been brought to the notice of the union and the state government so that some financial aid can be provided to them for the installation.

Meanwhile, Haryana Agriculture Minister Om Prakash Dhankhar had announced Rs. 11,000 each for farmers who installed this system in their fields and showing others way to fix the problem and help raise the water table.

Talking to our correspondent, Agriculture Minister Dhankhar said that water harvesting is the need of the hour and if farmers have come forward with the idea of saving water through legal and workable solutions then they would be felicitated at the right platform.

Although agriculture experts have lauded the efforts of the farmers, they have a few concerns. They suggest that installation should be done carefully and it should be kept in mind that no chemical or fertilizers should seep inside with the water.

If the farmers of the region are taking care of this part, then their initiative should be recommended for others use. Otherwise, it should be rectified to avoid groundwater contamination due to crops’ chemicals.

Desertification in the next 25 years

According to a report by the Central Ground Water Board, Punjab will turn into a desert in the next 25 years if its exploitation of underground water continues at the same pace.

He had announced to launch a pilot project in parts of Haryana districts, where sowing of maize, and pulses would be promoted by giving incentives to farmers.

Khattar has said that maize and pulses growing was common practice in the era of 70s, but with time, they were replaced by extra water-consuming crops of wheat and paddy.