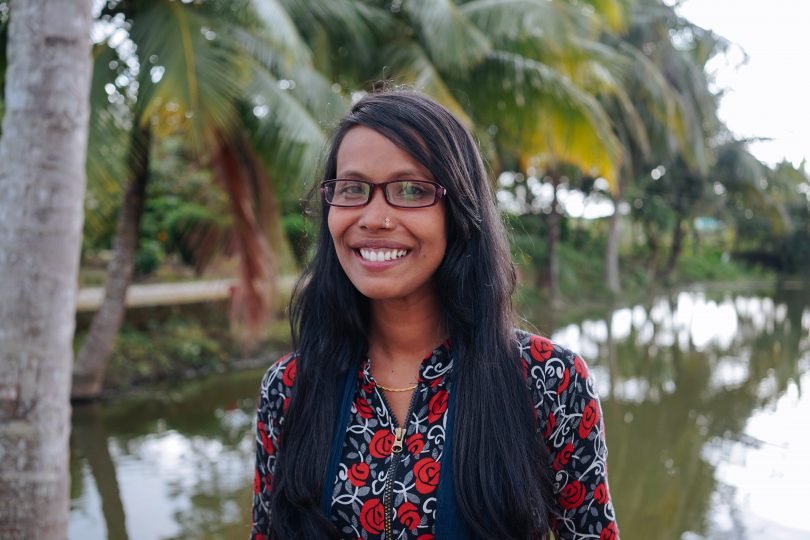 Moni Begum, a 17-year-old girl from Mulaira village of Moulvibazar District, Bangladesh had always seen young brides around her. She belonged to one of those regions of the country where child marriage was a norm. She was nine years old when her elder sister got married at an age of 12. About 15 days after the wedding, her sister returned to her parents’ house and was unrecognizable. She got skinny and had bruises all over her body.

Moni overheard her family’s conversation and found out that her sister’s husband was an alcoholic and was not treating her well. This was Moni’s first close encounter with a child bride and how a young girl’s life changes after the wedding. She found it atrocious, but since she was the youngest one in the family, no one took her seriously.

When Moni turned 13, her best friend Surya was married off at a tender age. “She was so pretty and innocent. I never thought her parents would do that to her,” Moni recalls. Moni again could not stop her wedding since the entire ceremony was kept a secret.

In many cases, parents are aware that it is illegal for underage kids to get married. So to escape from legal consequences, they conduct the ceremony at midnight. The bride is also trained to not share this news with anyone. Since married women of the Muslim community do not wear Sindoor, it is very difficult to identify the marital status of the girl. And Surya’s was a classic case of a secret marriage ceremony.

“When Surya returned to school after a leave, I found something weird about her attitude. She had lost a lot of weight. She was crying and troubled yet was reluctant to share anything. I found out that she got married when I observed the wedding ring on her hand,” Moni said.

Moni was deeply touched by this incident and she decided to stop every child marriage in her village. “Since that day, every time I come to know about a child marriage, I show up at their parents’ house and try to stop that. I have personally seen the adverse effects of child marriage and I will not let that happen to any girl,” said Moni.

What she does? And how did a teenager eliminate the deep-rooted evil practice without any money? She started by randomly showing up at the marriage ceremonies and tried to convince the parents. “I tell them the importance of education and why girls are not a burden to the family. I ask them to spend marriage, money on the education and this way the girls can get better groom also,” said Moni. Rather than preaching adverse effects of child marriage, Moni focuses on showing solutions to the families.

In parallel, she strikes conversations with the girls and trains them on how to say “No”. She also empowers them to speak up their mind and confront their parents when they force marriage upon them.

For instance, when parents talk about the safety of the girls and how getting them married is preventing them from getting raped and exploited, Moni tells them that it is usually the husband that rapes the young wife in such cases. “Just because your daughter is married doesn’t mean she is happy. I try to emotionally tackle these things,” Moni said.

She further involves police and government officials when the matter turns difficult to handle on her own. She further learned the laws and legal powers a girl can avail. She further contacted different NGOs, took their support and created a network of influential people who showed up to support her every time she needed a helping hand.

“It was extremely difficult to break into the orthodox system of the village. But I kept trying. And when they realised that I am not giving up and in fact, police are with me, they started taking me seriously,” she said.

Often when the girl was about 15 to 16 years old, parents would lie and try to portray her as an 18-year-old. Here, Moni demands their birth certificates and proof of their age.

The impact – not a single child bride in her community anymore The current situation is wedding cards of child brides are distributed in the absence of Moni. She is not invited to the weddings. People have started fearing her and she has been able to stop over 150 child marriages in her village.

Sharmin, a class seven girl is one of those 150 girls who got a second lease of life. Sharmin’s parents were forcing her to get married against her will. When Moni found out about this, she went to her house and confronted the family. When the parents refused to listen to Moni, she took help of her teachers. Even this did not work out. She finally went to a government official who told the family that if Sharmin is seen with a ring on her finger in the next couple of months, the family will be arrested. The family then finally dropped the idea of Sharmin’s marriage and she is currently studying in grade 10.

Moni’s work has resulted in complete elimination of child marriages in her community. More and more people are becoming aware of the issue and its repercussion. The topic, which was layered deep down in the community and was not even discussed is now being talked about openly. For the first time in her locality,  not just general public but government officials and influential people have come together to solve the issue. In addition, the youth of the community now has a platform to raise their voice and a network to seek help from.

The big plans for future Moni has started a foundation to develop life skills among children between the age group of two to 18 in her village. She also runs a Child Marriage Eradication club where she is training about 40 girls and 10 boys on how to stop child marriages and how to deal with the community.

She closely works with organisations like Save the Children, BRAC and Ashoka to reach more children and scale up her area of work.

“Keep your emotions and determination in pace. Keep it inside you. If you truly know that even if your work is helping one person, keep going and don’t stop and god will help you.” she concludes

How you can help? She currently needs Rs one lakh to set up a life skills centre in her village.

She doesn’t have any space to meet other kids and train them. She sometimes finds available spaces like gardens and government spaces to organise meetings. She provides tuitions to other kids to generate some money to spend on her activities, which is not sufficient to scale her work.

If you want her to reach her goal, please provide her financial support and help her stop more child marriages. You can help her by mailing us and we will send you the account details to transfer money. Remember, no contribution is a small contribution!

Please mail us at- thestoriesofchange@gmail.com