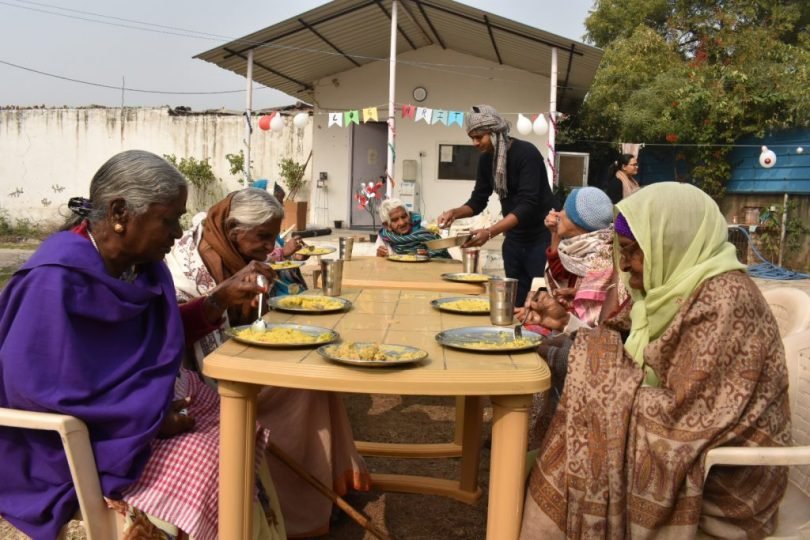 Thrown out of the house by her own son, dropped off at an old age home by her own daughters who never came back to visit, and many more stories of neglected elderly women in Delhi will make you rethink if we are really developing?

By Rahul Satija and Kashmira Sachdeva

From the corners of Chhatarpur, seven abandoned elderly women cheering for life and grooving to the beats of dhol jagiro da will make anyone realise how important it is to stay close by your beloveds.

Rita Peter, 75, mother of six children from Burma, shifted to India long ago. “All my children are now happily settled in their respective marriages, they are young people. It was my decision to not stay with them as I didn’t want to stay with them in their young life,” said Rita.

According  to a 2016 report by the ministry of statistics and programme implementation, India has 103.9 million elderly people above age 60, about 8.5 percent of population.

Over two-thirds of elderly people say they are neglected by their family members while one-third elderly claimed to have suffered physical or verbal abuse. Those in urban areas bear the brunt more than those in rural areas, according to a study titled ‘Human rights of elderly in India: A critical reflection on social development’.

Champiya (champi aunty), 88, previously stayed with her daughter. She shifted to Wishes and Blessings in June 2018. Her daughters took her to this organisation stating they are going to visit a chemist shop to get medicines for her treatment. They never returned.

Champi aunty didn’t even realise when they left her. One of the managers there told us about the physical abuse she used to go through and how her own son damaged her right eardrum. No one comes to see her.

‘Main unki maa nahi wo mere bache nahi, unko money chahiye money’. She doesn’t even consider them as her children and refuses to even talk about them.

Rukmani, 65, mother of three, was so cheerful and joyous and was so eager to meet us.

“(I do not remember why I am staying here. One day my son left me here)”

“I enjoy staying with these people. everything is perfect, and by God’s grace everything’s going well,” she added.

When asked about her son she said, “wo kal aa raha hai aur mujhe le jayega (he is coming tomorrow and will take me from here)” with a spark in her eyes and excitement on her face that clearly spoke how much she missed her family’s presence.

However, in their twilight years, these elderly have found a new home for them. Their outlook towards life was so decisive that we didn’t notice about their shabby past. All those smiles and laughter were created by the people working for ‘Wishes and Blessings ‘ a delhi based organisation working for unprivileged women and children.

One of Wishes and Blessing’s many initiatives is Mann ka Tilak, an old age home helping the elderly live with dignity.

In January 2018 Mann ka Tilak got a call from a shelter home in Najabgarh where they found a lady named Rupsheela was lying on a mat from three days and wasn’t ready to get up. Later the team found her home was just at the back side of the shelter home.

“Her son threw her out of the house. We brought her here and tried to contact her son regarding the condition, but aunty was not willing to go back or even talk to him,” said Riya Gosain, Manager, Wishes and Blessings.

Rupsheela didn’t want to return. She claimed that her family was planning to kill her and had disrespected her multiple times.

After the demise of her husband, Rupsheela had a property registered. Her son once came to the old age home to see her and requested her to go back along with him but Rupsheela was not ready to go back, she didn’t even want to meet. But his continuous visits made her heart melt.

After reuniting the families with the elderly we stay in touch with them and the aunties. However, after leaving this place, we were unable to contact Rupsheela aunty. We don’t know where she is and how is she doing,” said Riya.

All these women show immense strength. After seeing so much hate and neglect in their lives, they are ready to start a new chapter of their lives in an old age home with those who truly understand them.