How did an HR professional from Bengaluru give shape to a film without any experience in animation and that too in a language unfamiliar to him? Find out more about the journey, the film’s interesting story and how hundreds of people joined hands to finish this ambitious project.

“Have you heard of Punyakoti?” a friend asked Ravi Shankar V, an HR professional from Bengaluru. Hardly did Ravishankar know that this one question will give his life a new direction.

Punyakoti is a cow from a famous Kannada folk song, Govina Haadu. The song is about the truth-speaking cow and her encounter with a hungry tiger. Punyakoti is caught by the tiger and begs to let it go to feed her calf. It promises to return to the tiger after feeding the calf. The tiger agrees, and the cow keeps the promise.

As Ravi listened to the song, he thought about the various environmental issues faced by our society, how we treat our animals, the human-animal conflict and much more.

Moved by the story, he decided to make it reach the wider audience and make 90-minute 2D animation feature film in Sanskrit.

So how did a man without any experience in Animation and knowledge of Sanskrit managed to create this film?

Ravi attended a 10-week long Sanskrit course, which gave him a basic idea of the language. He then self-learned basics of animation, got freelance animators on board and kickstarted the project in 2013.

“I would say it was my ignorance and foolishness that made me do this. Had I known about the complexities and high cost involved in animation, I wouldn’t have dared to start this,” he says. 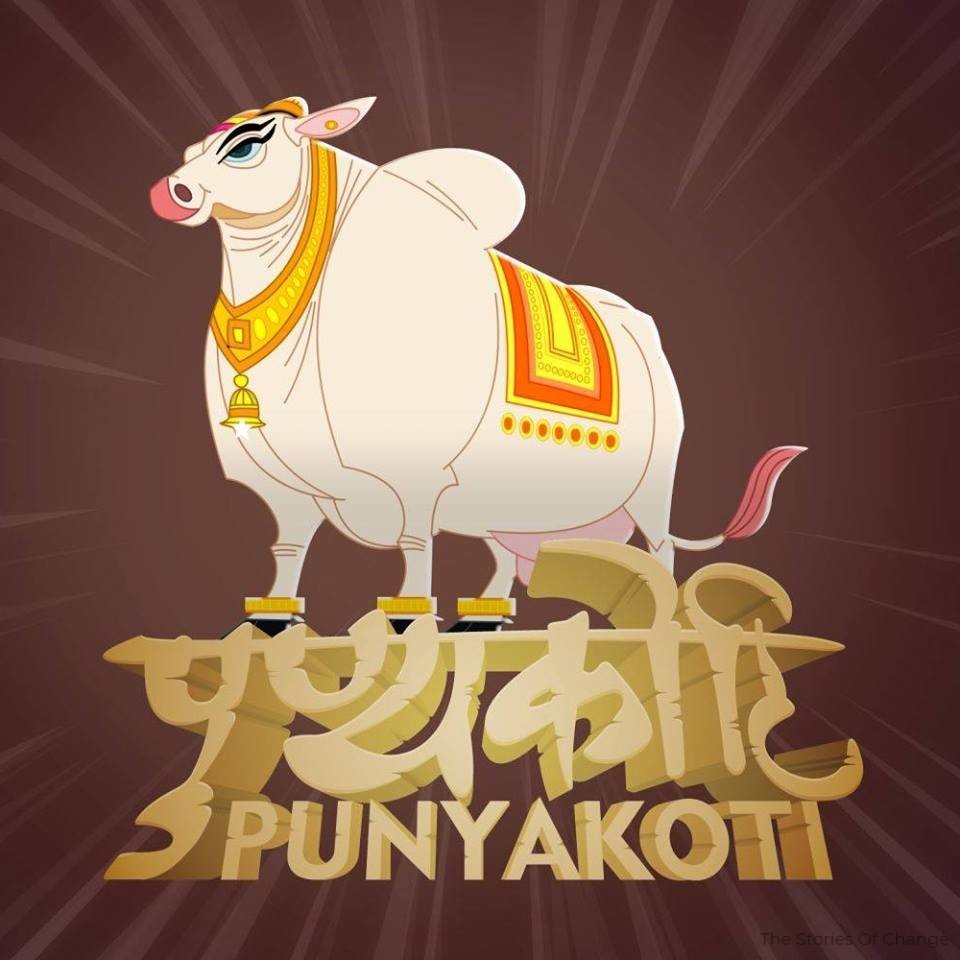 Since the story revolved around animals and a talking-cow, it was easier to get the scenes through animation. “I could change the landscape, make changes multiple times, which would not have been possible in a regular film,” says Ravi Shankar.

The decision to make it a 2D animation came due to lack of funds and limited resources. Making the film in 2D gave the team liberty to not rely on high-end technology. Also, it gave the movie a more Indian look and portrayed Karnataka puppetry style.

“This way our entire focus can be on interesting storytelling and not on perfecting the animation. 3D animation has a lot of elements involved and we didn’t have time or budget to do that,” he says.

After learning basic Sanskrit, Ravi Shankar read some Sanskrit Literature and realised the huge body of work in this language and how it is gradually dying. 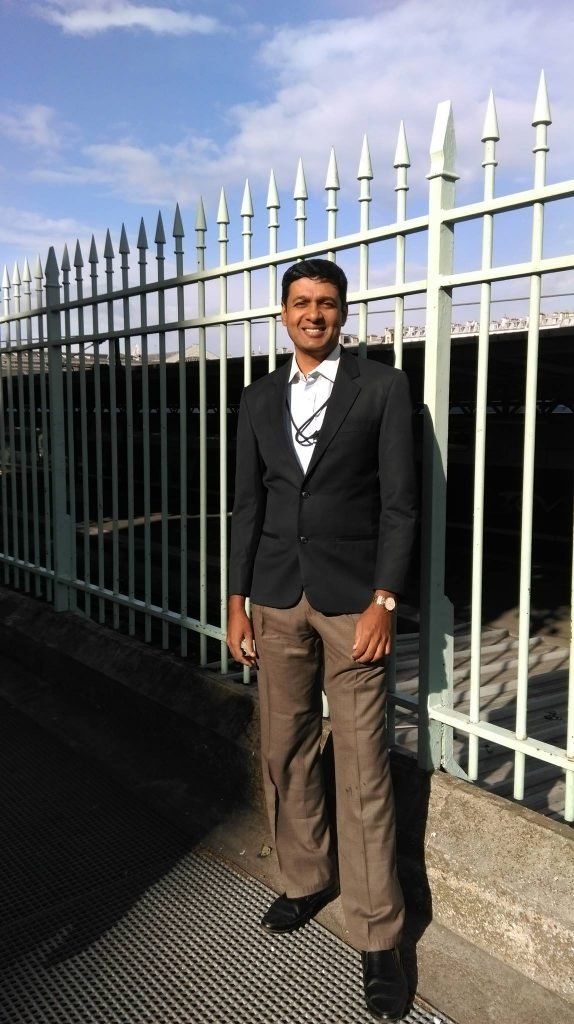 “Sanskrit is probably the oldest language. It covers over 5,000 years of knowledge. Many other languages are also inspired from it. Why do we have to wait for the West to come and tell us that the Sanskrit is good? Why don’t we celebrate what we have? I felt really bad seeing how this incredible language is fading away,” he says.

Ravi Shankar felt Punyakoti can be a good way to trigger interest in the language among masses. The story of the film beautifully portrays several environmental issues and is not age restricted. It can be a good visual and learning experience for both kids and adults.

The making of the film Renowned music composer Ilayaraja extended his support by agreeing to give music, eminent actor Revathy too came on board along with Roger Narayan, the Hollywood actor and Prof. SR Leela, who has over 40 years of experience in Sanskrit Drama and Literature.

With an interesting script in hand and strong support from the industry veterans, Ravi Shankar used all his savings to start the project. But this was not enough. He needed experts to actually give shape to the film. He reached out to animators and got about 120 freelancers on board.

However, making an animation film was a costly affair and this humble team could not afford to fund it entirely. This is when they launched a crowdfunding campaign on Wishberry in 2015 and raised around 40 lakhs. It became India’s biggest crowdfunded project on a platform in 2015. Over 250 people contributed to the campaign and showed immense love for the project.

These funds were enough to give an initial boost to the team. “Over 20,000 hours of my unpaid work has gone into the making of the film. I have personally made over 3,000 sketches,” says Ravi Shankar.

The team used Audacity, a free software for recording and editing and Adobe Suite for animation. It took the team about six years to finish the animation of the film and bring the movie into the stage of post-production.

The biggest challenge apart from the funding was to find the right-minded people and coordinate with the freelancers. Some left work midway and some were too slow in completing a scene.

“I am making this movie while I am still pursuing a corporate career with Infosys. I and my family have made great sacrifices in the last one year to bring this project to this stage.

Since animation was a new field for Ravi Shankar, it was a lot of trial and error for him. Also, keeping the momentum going for over five years was difficult. “There were many times when I doubted my decision. But the love that people showed to our film kept us going,” he said. 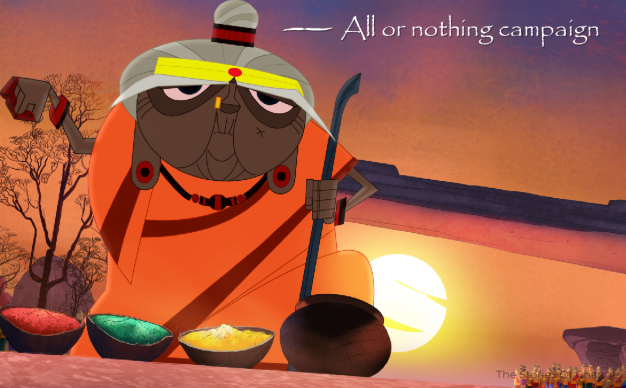 The animation of the film is complete. It is currently in the process of dubbing and post-production. However, the team is again struggling with the lack of funds.

The trailer of the movie was launched recently and received over 2 lakh views in just two days of its launch on May 22. The Punyakoti team needs one last push to bring this movie in front of the audience.

They have started the second part of their crowdfunding campaign where they aim to raise Rs 35 lakhs. Over 140 supporters have already backed this project and helped in raising Rs 16 lakhs out of the total goal.

The money will be used in the dubbing of the movie, studio charges, post-production, release, promotion, taking the movie to film festivals, etc.

It is all or nothing campaign and each contribution matters. If they do not raise the goal amount, they will not get anything.

You can extend your support by supporting this movie here.