The Central Pharmacy Act has caused tremendous havoc in the life of pharmacists in Jammu and Kashmir. Thousands of chemists are now out of jobs and struggling to make their end meets. After the abolition of article 370, over four lakh people have been out of jobs, causing a loss of Rs 18,000 crore loss in the state’s economy.

In the bone-chilling cold of January, a pharmacist Sajad Ahmad Chopan walks at least two kilometers every morning to get newspapers from the local news agency in southern Kashmir.

Chopan (32) is not a regular newspaper reader, but these days he peeks into the newspapers to find the news story covering the concern about pharmacists.

Hailing from Tral Township of South Kashmir’s Pulwama district, 40 kilometers away from summer capital Srinagar, his concern grew only when the government refused to renew the licenses of druggists and chemists, lacking B-Pharmacy degree.

Last year on August 5, the central government abrogated Article 370, the special status of Jammu and Kashmir (J&K) and bifurcated the state into two Union Territories (UT)—J&K and Ladakh, the move had taken down the autonomy of different departments and organizations in J&K including the J&K State Pharmacy Council.

The change after article 370 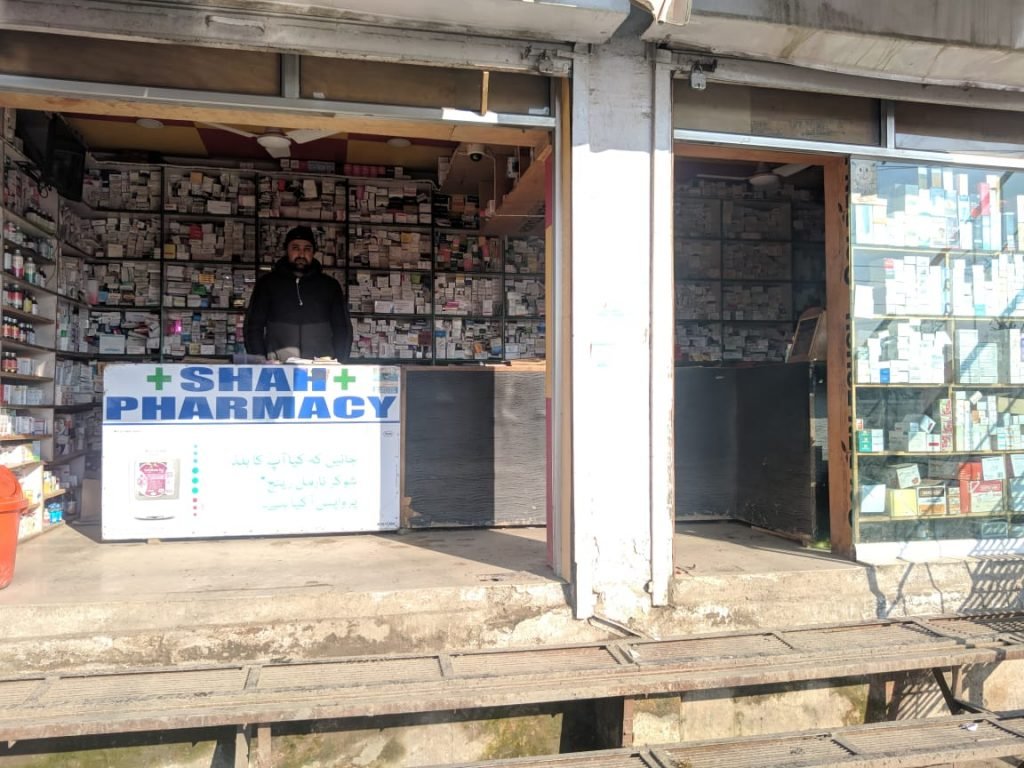 “I could vividly remember it was March 2004 when I got involved with the medical profession. Now, after 16 years the government is suddenly refusing to renew our licenses just because we do not possess B-Pharmacy degree,” said anxious Sajad Chopan.

Taking a long sigh Chopan says he is the sole breadwinner in the family. “I don’t have any means to earn my livelihood except this medical store. My father is a labourer and my siblings—brother and sister are yet to get married.”

The plight of the pharmacists 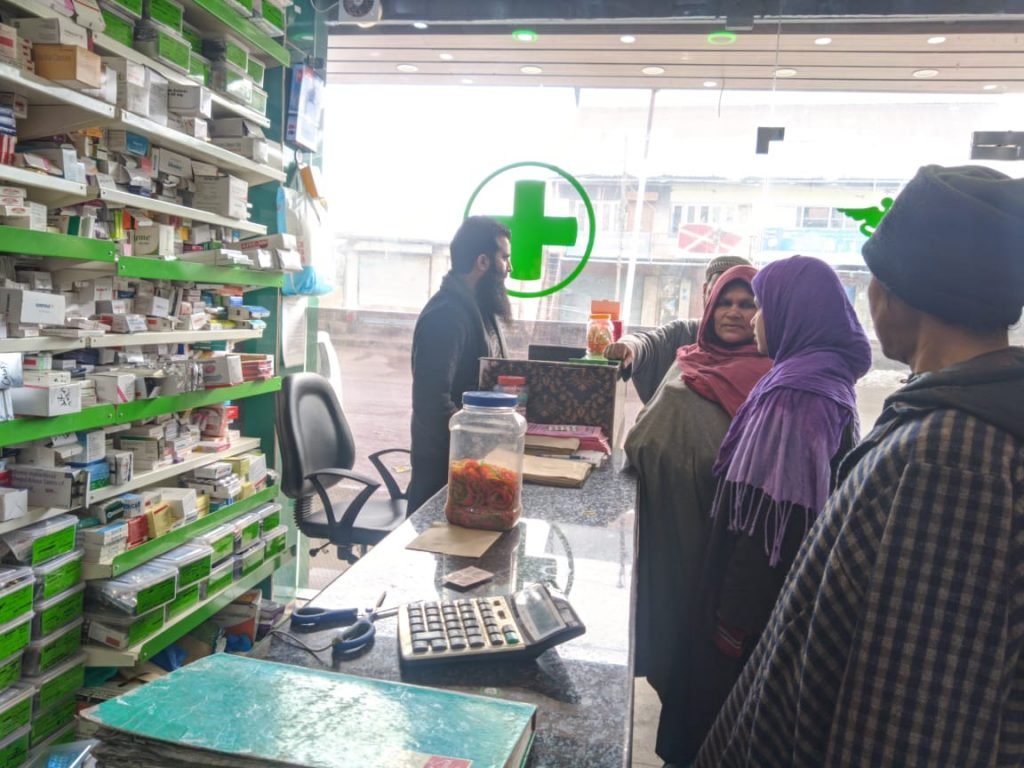 Patients and their attendants purchasing medicines from Peer Medicate Bemina

In the vicinity of Chopan another pharmacist Gulzar Ahmad Khan desperately remains busy on the phone. Instead of handling patients Khan can be seen calling pharmacists across the valley only to seek the government’s response about the pharmacists.

“Apart from calling pharmacists these days I have been reading newspapers, Kashmiri, Urdu and English only to see if the government is going to give us any respite,” says Khan.

20 years ago Mushtaq Ahmad Shah migrated from his home town Sumbal in north Kashmir’s Bandipora district and started his medical store in Srinagar city’s uptown Bemina. Shah (40) says he hardly expected that one day he has to think of winding up his medical store namely, Shah Pharmacy.

“Our family left all the luxurious of home and migrated to Srinagar city for starting a medical store. In the year 2000 J&K State Pharmacy Council issued us license under C-Pharmacy and we set up our medical store opposite to Sher-I-Kashmir Institute of Medical Sciences, JVC here. Now suddenly our licenses are stated invalid by the government, which is surprising,” said Mushtaq Shah’s younger brother Ishtiyaq Shah.

Only a year back in January 2019, 32-year-old Tauseef Maqbool Wani established a medical store—Peer Medicate in Bemina near Srinagar-Jammu national highway. Dotted with hurdles and challenges Wani was only able to run his shop for seven months. The government-imposed curfew and clampdown, following the central government’s decision to scrap J&K’s special status on August 5 caused him to shut his shop down. “After a gap of three months we reopened our business in November but this time there is mounting challenge ahead. Now the government is only renewing the licenses of B-Pharmacy based pharmacists. If this will happen then our boss can anytime shut this medical store and lay off his staff,” said Taseen who works as salesman in the medical store.

The medical store namely, Peer Medicate is crammed with both allopathic and homeopathic medicines. “We sell genuine stock and cater around 100-200 patients every day,” said Taseen with smile.

According to the Convener of All Kashmir Pharmacists Association Fayaz Azad says if only B-Pharmacy is made criteria for issuing licenses to pharmacists, then more than 30,000 pharmacists would be rendered jobless in J&K.

“We had a meeting with Lieutenant Governor Girish Chander Murmu in which we appealed to him that the government should give some breathing period for those pharmacists who do not have requisite qualifications as per the Central Pharmacy Act but are currently having licenses as per the erstwhile State’s Pharmacy Act.”

Hundreds of pharmacists and druggists narrated their concerns and termed the government decision worrying.

“I have set up my medical shop some 15 years ago, but I never faced any issue regarding the renewal of the license. After every three years my license would get renewed but now I am told I am not eligible to renew it,” says a distraught pharmacist Imran Ahmad Kakapori of central Kashmir’s Budgam.

The loss of livelihood

A pharmacist Sajad Ahmad Chopan sitting in his shop in south Kashmir’s Tral.

Jammu and Kashmir Chemists and Druggists Association said Drug Department has suggested license holders may be given breathing time of three years till they qualify for holding a license under Drug Act 1948.

But many pharmacists term the demand for providing a grace period to chemists a futile exercise.

“I wonder how a 50-year-old pharmacist can avail B-Pharmacy degree when he has left his education decades before. I have been associated with this profession since 30 years. Now when I am 50, where will I go this time,” asks Saleem.

Assistant Drug Controller Kashmir, Irfana Ahmad says the proposal was already sent to the government for protecting the chemists and druggists who obtained a license before 31st of October 2019.

Thousands of pharmacists are already suffering losses due to political uncertainty in the valley. The imposition of the central pharmacy council is adding salt to their wounds.

In the political unrest emerged during 2016 and 2019, dozens of medical shops were set ablaze by unknown people in parts of southern Kashmir.

“The medical shops were burnt by miscreants who indulge in intimidation and terrorist activities,” said a police official posted in southern Kashmir.

The J&K economy is witnessing crisis due to the emergence of political unrest from time to time. From 2008 valley has witnessed bloodshed, violence, clampdown, curfew, internet blockade and consecutive business shutdowns.

The continuous internet blockade has also badly affected the condition of pharmacists in the valley. The sales have also terribly fallen due to political crisis. Finding no income in four months, dozens of pharmacists have already laid off a major chunk of their staff.

A rough estimate, around 4,000 salesmen were earning bread from these medical stores.  Now, mostly they are sitting at home with no work and no salaries.

“I was working at a medical store in downtown area of Srinagar city. With no work left, my employer told me to go home,” said Riyaz Ahmad, 30, a resident of Batamaloo.

He has a family of three to feed and he finds it very difficult to have both ends meet. 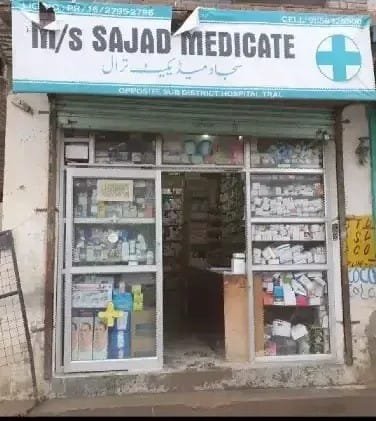 Since internet services remain suspended in Kashmir for five months, pharmacists suffered losses and the computer-based staff was terminated.

“Despite having 10 years of computer experience I got no salary for five months and was forced to look for an alternative. I have now started to work as a daily-wage labourer. I can’t express the sufferings I faced these days,” said 31-year-old Danish.

To understand the implications of clampdown on J&K economy, the Kashmir Chamber of Commerce and Industries (KCCI), recently came up with a report which reveals that businesses in the valley have suffered losses worth Rs 18,000 crore since 5 August 2019.

The KCCI report says at least 5,000 salesmen in tourism and mobile services business that includes some 2,000 shops in the commercial hub of Lal Chowk, and its adjoining markets were not paid salaries for the months of August, September and October while 4.96 lakh people lost their jobs.

Sectors like tourism, horticulture, and agriculture have been the worst hit.

“The internet shutdown added to losses due to disruption in online shopping and transactions after August 5th,” said KCCI president Ashiq Hussain. “Online business has taken a severe blow.”

The report states that the general trade sector with 1.20 lakh people tops the list in terms of job losses in Kashmir since August 5th.

“In tourism sector, 74,500 jobs were lost in 120 days. In handicrafts sector including the Kashmiri carpet industry around 70,000 people lost their jobs. In horticulture, floriculture, agriculture, and sericulture sector 12,000 jobs were lost,” reads the report.

The report estimates losses in the industrial sector, which includes manufacturing, construction, mining and quarrying, electricity, gas, water, and other utility services at Rs 4095 crore. In the services sectors — hotels, restaurants, transport, communications, financial services, real estate, and professional services, public administration and defense — the total loss is to the tune of Rs 9191 crore.