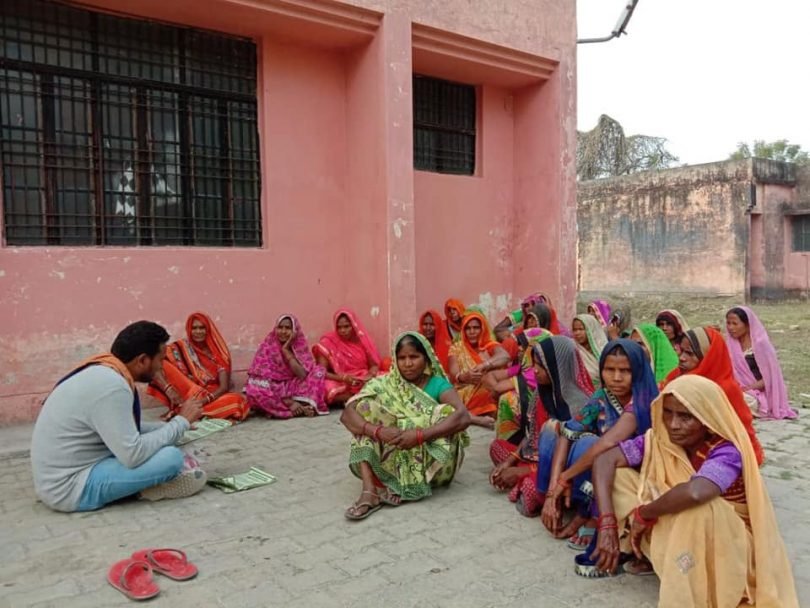 A group of 10 individuals are on a journey to walk 1200 kilometres to spread the message of harmony. In times of hatred and violence, they are opening dialogues for people to look beyond religion and focus on real issues of the society.

In December 2019, when the protests against Citizen Amendment Act and NRC were on a rise, Uttar Pradesh was one of the most affected regions in the country where violence caused irreversible damage. An eight year old boy Sageer Ahmad was killed in a stampede in Varanasi when the police was chasing the mob.

Sageer died in the same narrow lanes where he’d often play. Sageer was not the only one who lost his life due to a conflict between the protestors and the police. Sixteen people lost their lives on December 20, 2019 after a clash with the police.

It was these cases of violence that shook Manish Sharma, a 33-year-old activist from Varanasi. He decided to take action against such violence. Sharma (centre) with the villagers.

He brought together students from 30 universities of Uttar Pradesh and went on a fact checking journey in 15 cities across Uttar Pradesh. In their journey they met the families of those who suffered and spoke to communities at large to find out the truth behind the violence and deaths. The stories they heard were horrifying.

“We decided to visit the affected families, find out their stories and spread the message of love. Till the time our country and citizens look at each other as enemies, we will never develop and grow,” Sharma said.

What started as a concern towards those affected, became a bigger project when Sharma decided to spread the Gandhian ideology to the masses.

He formed a group of 10 like minded people and decided to walk 1,200 kilometres to spread the message of love and harmony in the times of hatred and violence.

Walk for a cause The peaceful march started in February and is expected to conclude in April first week.

“We believe that one should love even their enemies. There should be a regular communication among the masses, which lacks today. We just wanted to keep the conversation going. We decided to walk for this cause as this is the only resource we have,” Sharma said.

The group decided to walk from Chauri Chaura, Uttar Pradesh to Rajghat, Delhi covering 1,200 kilometres by foot. They named this movement “Nagrik Satyagrah”.

The plan was to spread the message of harmony and make people understand the real issues. When the entire politics is currently revolving around hatred and religion, the group wanted to make the common man understand why we all need to come together beyond our religion and talk about important issues like employment, housing, and food.

The group of 10 individuals started their journey on February 2, 2020 from Chauri Chaura. They chose this place as it was the very same place where Mahatma Gandhi called off  the non-co-operation movement after a group of protestors clashed with police causing violence and loss of many lives.

The place itself holds a strong symbolism to Gandhian way of living and non-violence.

“We started our journey without any resources. We spent nights at villagers’ houses, ate food that they lovingly prepared for us, and continued the journey with everyone’s support. That is why we walk in a small group, so that it doesn’t cause inconvenience either to the state or anyone who is hosting us,” Sharma said. 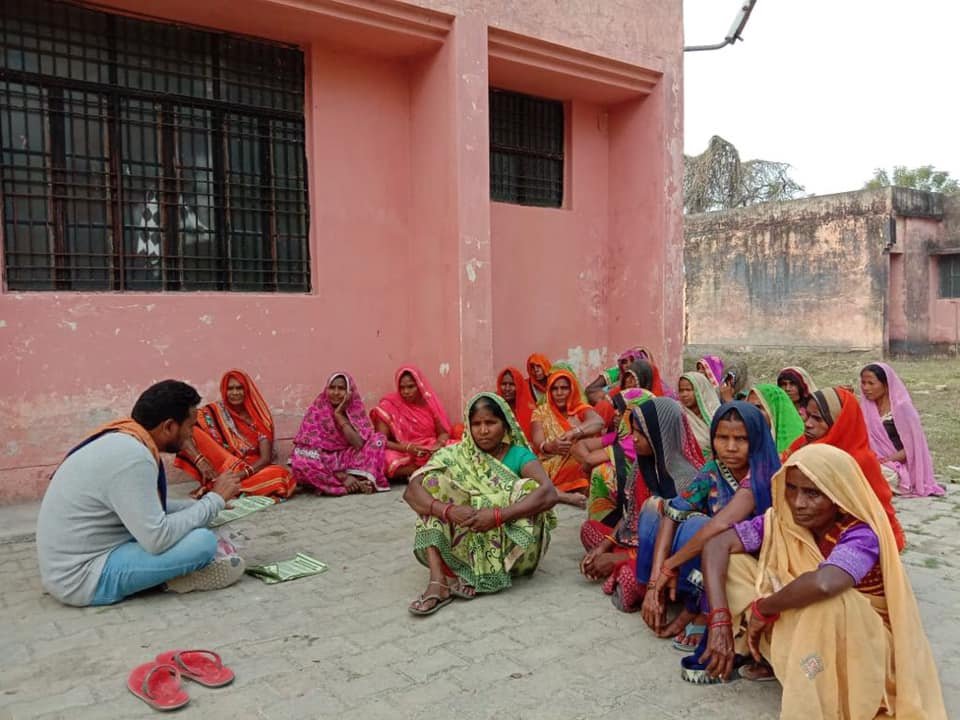 The “satyagrahis” talk to the community in small groups.

The group has already walked 650 kilometres and have spoken to over a lakh people on the way. With each step they took, and each person they spoke to, they became more sure of the fact that love and communication can resolve any conflict.

They spoke to about 3,000 people every day. And each person came together to spread their message forward.

Sharma shares an anecdote from his journey. An elderly lady who worked as a daily wage labourer and earned just Rs 40 per day attended one of their village meetings. She bought a biscuit packet worth Rs 10 to feed Sharma after a long day. The gesture made him realise the purity in the hearts of the common citizens and strengthened his belief in their journey.

“Politicians are using our differences. We have to stop that. When people realise that we are not pushing any agenda and are talking about the real issues and solutions, they come forward to support us,” he said. The group was arrested by the state police twice.

However, the journey was not easy for the group. They were arrested by the police twice in their journey. First in Ghazipur, Uttar Pradesh on 11 February for six days. And then again for five days on March 5 in Fatehpur.

They were arrested on the charges of allegedly “instigating and misleading” locals and organising a padyatra without seeking permission.

Sharma claimed that they were tortured physically and mentally in Fatehpur jail and were arrested without proper reasons.

“Our motive is not to go against the state or police. They are doing their job and we will continue to do our job. We are not doing anything against the law. We have alway cooperated with the police and authorities. We will not stop until we reach Rajghat,” said Sharma. 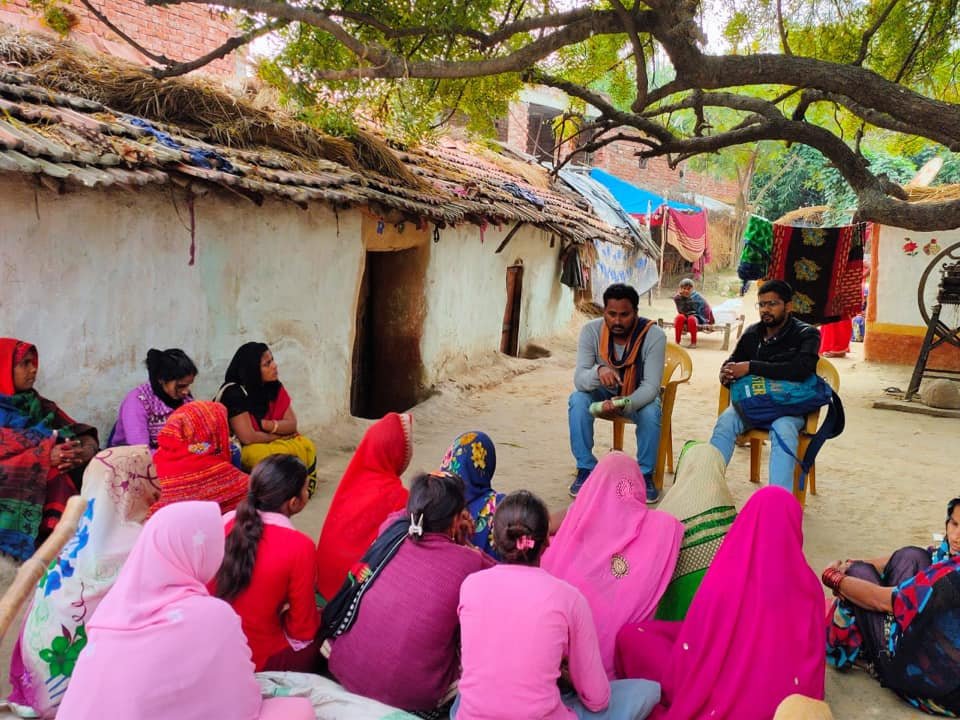 The idea behind the march to open a dialogue of peace and harmony.

The group is expected to complete their yatra in the first week of April and conclude at Rajghat, where Gandhi was cremated. They will be walking another 550 kilometres in the next few weeks covering several villages and cities of Uttar Pradesh.

“The padyatra will conclude, but there is a lot that needs to be done. We have observed some shocking stories from the ground including the mislead youth of the villages and the poor conditions and corruption in the jail. We want to work towards that,” Sharma said.

The group urges people to keep the religious differences aside and come together to ask relevant questions from the authorities.

“We have to create an alternate system against hatred and rebuild spaces of love,” concludes Sharma.

To know more about the initiative, check out their Facebook page.