Nirupa Rao spends hours, even days in front of a tree to capture its minute details through paint and brush. Know more about the colourful illustrator who is documenting the native trees of India like no one else.

In a world where photography and digital media have taken over, Nirupa Rao brings up her brush to the paper to bring alive the beauty of nature.

Nirupa Rao, a Bangalore- based artist, has taken up a unique career of botanical illustration. With her minutely detailed paintings of trees and animals of the Western Ghats, she’s already charmed a huge audience.

Her first book, Pillars of Life: Magnificent Trees of the Western Ghats, was published by the Nature Conservation Foundation in 2018. She worked with wildlife biologists Divya Mudappa and TR Shankar Raman, working in the Anamalai hills in the southern Western Ghats.

The book brings out the grandeur of the native trees of the region. It is richly illustrated. Nirupa Rao and another artist, Sartaj Ghuman, contributed a few sketches that connects the lives of the people in the region with these magnificent trees.

“I didn’t paint much as a kid,” Nirupa recollects. “I started painting only five years ago.”

The love for plants runs in her family. She has quite a lot of family members who are botanists. Her great uncle, Late Father Cecil John Saldanha, was a well-known botanist from Karnataka. Rao completed her graduation in Sociology and History from abroad, and had come to India just for a brief period of time. That is when she spoke to her family about native plants, and the idea of botanical illustration came about.

“It’s quite a well established field in the West and Japan. In India, though, there are only a handful of practitioners,” She said.

Her journey as an illustrator began with her going to a plant identification workshop in Kerala. There she met two botanists, Divya Mudappa and TR Shankar Raman.

“They were working on these very tall rain forest trees, and were finding a way of documenting and presenting it to an audience.” She said.

Even though they had tried photography, the dense canopy made it difficult to distinguish each tree. During sketching exercises in the workshop, Rao would draw trees and their leaves by memorising them.

The botanists loved her work and eventually thought of collaborating together, bringing forward the book Pillars of Life.

The process of bringing trees to life on paper

Her work involves hours, even days of continuous painting.

“Each tree, that I drew for the first book, would take me at least a week to complete with the perfect accuracy. I mostly do trees over a few days. I use a lot of photographic references as well. It is a tiring but very enjoyable process.”

Her painting style is such that, it depicts every small detail of the subject.

“Details are the ones that always excite me. The urge of painting comes when I see something greatly detailed. Different artists are inspired by different aspects. For me, it’ll always be the small details.” Her process of working also involves her going to places with incredible flora and fauna. “My favourite illustration, at the moment, is one of the myristica swamps. The swamps are basically wetlands, and are named after a particular species of wild nutmeg, grown there. My cousin and I trekked the whole way to see the swamps. The whole process of doing the painting is very memorable to me.” Currently, she is working on her second book. It started off as a children’s book, but she’s hoping that it would be something both children and adults can read and learn together.

To capture the Myristica swamps, Rao trekked uphill with her sister Sunita Rao, cousin Siddarth Machado, and friend Prasanjeeth Yadav, who are the collaborators for her second book.

“It’s on the charismatic plants of the Western Ghats. Exciting species like carnivores, plants that emit the smell of rotten flesh, stranglers are all going to be a part of this book.” Rao said.

Rao has got a National Geographic Young Explorer Grant for the book. 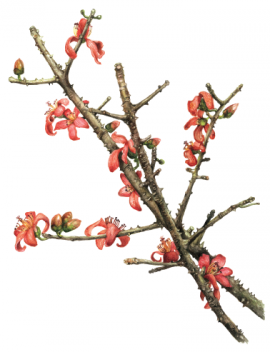 “Animals and birds are also a part of my second book. It would depict a few plant and animal interactions, to show that the entire ecosystem is very much interdependent.” Rao added.

She also explains a few native species that she discovered for the first time, while on her trip to the Western Ghats. Some of the mechanisms that trees employ are fascinating.

For e.g. those trees whose seeds are dispersed by wind may grow even taller than others, reaching above the canopy so as to catch the wind, to send their seeds flying and dispersing far and wide. Others may grow at forest edges or gaps, where wind speeds are faster than in the forest interiors.

They use a variety of methods to take to the air: wispy fan-like threads attached to seeds, seeds equipped with stiff ‘wings’, or cloaked in fluffy cotton-wool parachutes.

Unusual plants like, the Elephant Yam, which emits the stench of rotting flesh to attract beetles as pollinators or the Tropical Sundews, which have sticky red tentacles to trap and consume insects, are some of the species that attract her the most.

At a time when photography has grown in eminence, Rao talks about why her illustrations could still make a difference. “There are numerous benefits to photography. But I think illustrations, now, are pretty rare. In the older days, it was the other way around.”

She believes people will take notice of the efforts she’s taken because of the splendid details.

“People tend to notice illustrations as they are rare. Especially, when it comes to a subject like botany, which people do not naturally gravitate towards. Perhaps, someone taking the time to watercolor, in the digital generation, makes them notice.”

After the completion of her second book, Rao looks forward to working on a rural curriculum in Karnataka. Her long term hope is to make the biology syllabus, of our country, more India specific. She feels that children in schools don’t get to learn about the magnificent flora and fauna of their own nation.

She also expressed her desire, when asked if she wanted to capture anything else other than nature, through her illustrations. “I do like history a lot. So, in the future, maybe I would work on something related to that.”