Tumling, a small village with less than 20 families attracts a large number of tourists. However, this has led to a large amount of pollution in this tiny hamlet. Keshari Gurung, has taken on the task of cleaning her beloved village. This is her story.

Tumling, a small village in Nepal houses less than 20 people. However, the rustling of tourist voices made it clear that it was a popular little hamlet.

The tiny village hosts a few small cottages and huts along with a magnificent look of the Kanchenjunga snow peaks. 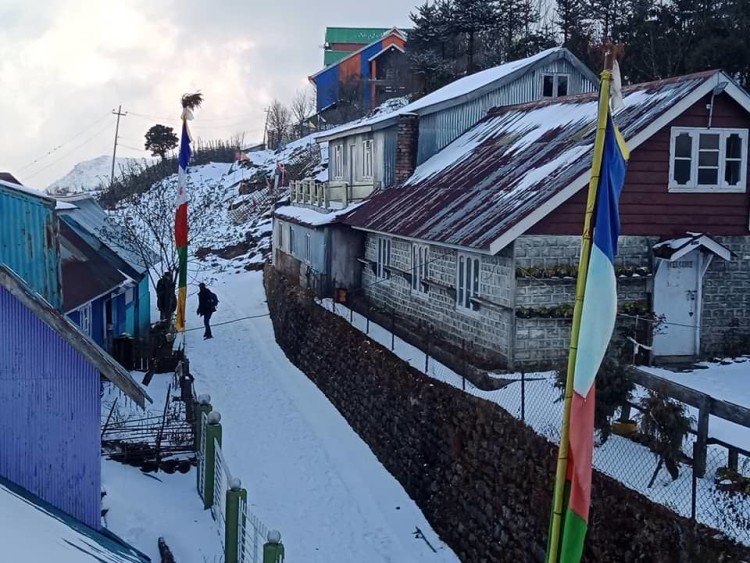 One of these cottages is the home of Keshari Gurung, a passionate woman on a mission. Gurung is a waste warrior and calls herself a ragpicker.

Worried about the waste that is destroying Tumling’s beauty. Gurung has been cleaning the roads of Tumling all on her own.

One can imagine the murmuring of expressions she has been facing as she picks up wrappers, packets, used pads, and all kinds of leftovers. With a giant bag on her back and a heart filled with determination, she doe not remember how many years have gone with the wind doing this work against all laughter and objection.

“People hardly get the sense of what I do and often debar me from it,” Gurung, who is also called Nana by many villagers. (Nana means elder sister in Nepali). People also call her “Kabariwala” (Rag-picker), a word which would hurt many egos, but she takes a lot of pride in it.

“If cleaning my home and my village makes me a ragpicker, then I believe we all should be one,” she exclaimed.

With the growing tourism, Tumling is adapting to the nature of the city-life the visitors expect in their subconscious level. This growth has led to the locals concentrating in their booming businesses.

“We all are fighting a battle here; mine is to safeguard what is left of my birth land, for most it’s surviving the rat’s race,” she understands the melee her brothers and sisters go through.

Nana works with the Nepal Government in relation to trans-border issues in the Indo-Nepal border. Her biggest challenge has been to tackle the mass slashing of trees in the Himalayan borders.

The massive deforestation has completely changed the guise of Himalayas, from what Nana would experience during her early days of trekking and exploration. The logs are used as a mode of firewood to boil tons of yak milk. This yak milk is a resource for the inhabitants of the adjoining area and the biggest source of their income.

Nana believes that if the yak population is controlled in number and increased in quality, then one yak can give creamier milk, which can be used for making cheese. This is the only way that the firewood consumption will reduce without snatching the earnings of her people.

“We need to maintain a balance between what humans need and what nature needs. It is poignant that we have managed to delineate ourselves from nature.,” she shared.

Nana is also putting forward alternative combustion sources like paper brickets to be used instead of fuel. During the famous Yak festival, she plays a major role representing India’s side and spreading awareness on the long term effects of deforestation.

I met Nana as a Green Trail fellow under IndiaHikes and I built a relationship with Nana far beyond sisterhood, probably of waste-hood. When my fellow Green Trails mates and I went the second time with the mission to clean Tumling ourselves, it was Nana who sprang in and immediately left her set of chores.

Despite telling her time and again that she did not have to accompany us, she insisted that it was her willful obligation. Honestly, it is impossible to shake this woman’s stand. After a six-day trek, if she chose to walk up and down the hill with us to clean what is flung by others. She is far beyond young mouth’s persuasion.

Nana also runs sustainable tourism where she takes groups from all over the world for many treks along the Himalayan terrain. She shows them the culture of her tribe and how we have the option of exploring the exquisiteness of snow-capped mountains and leave them greener for our next visit.

“When I take my trekkers, I make sure they come back again and again, and get the same peace of mind,” says Nana.

To add to this, Nana also has an adorable son she adopted. He studies outside and comes every holiday and helps his mother do what she does.

Here we have a living example of a woman who is a social worker, a peacemaker, a policy builder, an explorer, a sister, a mother, and an inspiration-  all imbibed in one body.

My last visit to Tumling will remain eternal with her golden words: “This is my home. If I do not care for it, I cannot expect anyone to come from outside and do it. It hurts me to see the naked mountains, the very mountains I would run up and down as a young girl. My culture taught me to be a good human. My humanity rests with nature not apart from it.”

The story is part of the Milaap Fellowship Program.  It is a unique opportunity, providing young professionals with a six-month fellowship to contribute to a cause and cover inspiring stories of change.