Khushboo’s life changed after an acid attack. She is now trying to build it piece by piece. She single-handedly takes care of her daughter and two siblings.  However, the lockdown has brought medical and financial troubles to the family. Read more about Khushboo’s attack and how her life changed after that.

Khushboo Sharma was fast asleep when it happened. She didn’t know what it was or how it could cause permanent damage to her. It was only after the excruciating pain she felt, she realised it was acid. She was asleep next to her husband and daughter when suddenly she woke up to a sensation that she had never felt before. A sensation as if a fire had been lit on her face. She screamed as the skin of her face and arm started melting. In all that commotion, she heard her husband claim that he had seen her father run out of the room.

Despite being in all that pain she kept asking, ‘Why?’ It was on her way to the hospital, that she realised the reason as to why her father possibly attacked her. It was because a couple of days back, she had told him that he had to stop abusing her mother or else she would report him to the authorities. She never really got along with her father as she was aware of the fact that he wasn’t a good man.

There were no government hospitals willing to treat her at the time. Therefore, Khushboo had to be admitted into an emergency ward. When they arrived, her treatment began, but the pain was unbearable. During the treatment process, her eyes and nose were covered, but she had a feeling that her treatment was being done haphazardly. As a result of the attack, her face and arm were scarred. Khusbhoo before and after the attack

After the attack, she started living with her mother. Khushboo was not allowed to look in a mirror as they did not want her to relive the trauma. One day without her family’s knowledge, she took a look in the mirror and was devastated to see what had happened to her face. She was unable to accept the fact that what she saw was who she was now.

She eventually started to heal, got operations done on her eyes, ears and arm. However, on the day of her eye operation, her mother passed away, leaving her devastated as Khushboo could not handle losing her.

As time progressed, she started to grow suspicious of her husband. His behaviour started to change which made the suspicion grow stronger as to whether or not he was the one who attacked her. He didn’t want to be seen in public with her anymore, he would beat her and threaten to leave her and the child. Khushboo left her husband and came to Agra with her daughter and two siblings.

Khushboo tried to look for jobs but was unsuccessful until she finally applied to Sheroes Hangout and got a job as a waitress in the Agra-based Cafe. Working at Sheroes healed even more as it allowed her to forget the pain of the past by talking to other survivors. She used to tell herself that ‘if they can do it so can I.’ She also made it a point to never cover her face as it felt that she did nothing wrong so why should she be hiding her face.

Khushboo is currently going through a divorce with her husband now that she is earning enough and not dependent on anyone. Now, she is the sole breadwinner of her family, taking care of her two siblings and a daughter. It puts a lot of financial pressure on her having to take care of so many people, but in the end, it’s all worth it. She does what she can for them even if they don’t ask her to do so. 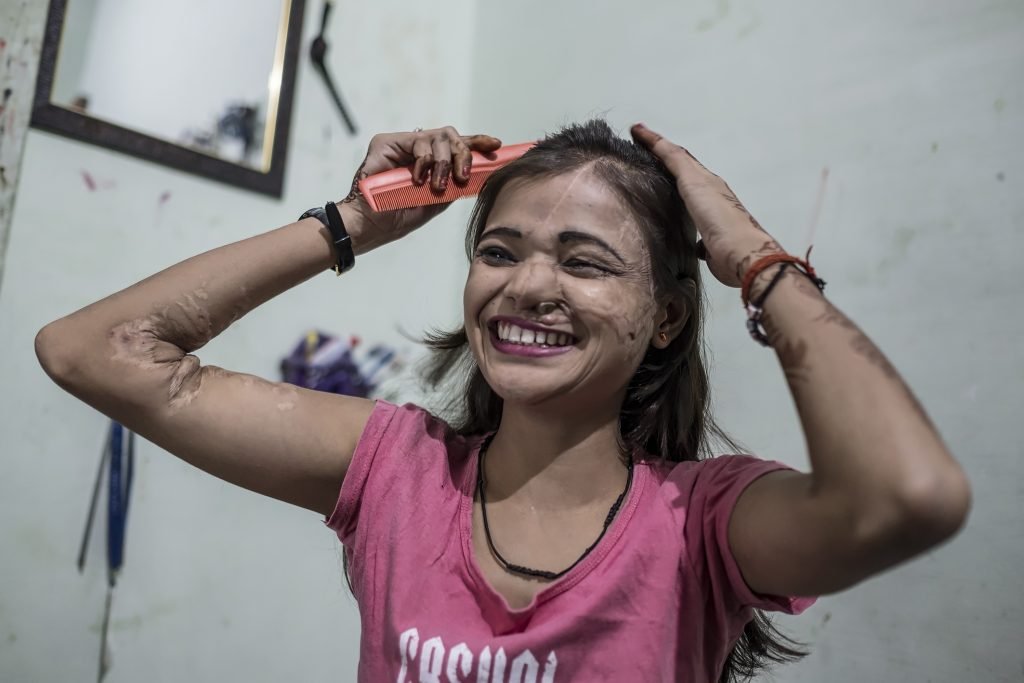 However, during the lockdown, she has been experiencing many difficulties, mostly related to her treatment. Doctors are not willing to treat other patients as they want to reduce the risk of them contracting Covid-19. Therefore, she is struggling with skin and eye issues due to the lack of treatment. Her skin starts to burn when it is hit by sunlight and at night. While sleeping, she is unable to shut her eyes, causing it to tear up continuously.

It is not only Khushboo in the family who’s having medical issues. Her six-year-old daughter and her younger brother are also suffering from a skin ailment.  Even her younger sister is facing issues related to her eyes.

Their medication is relatively costly and it consumes about a fourth of the salary that Khushboo is receiving now. Because of all that, she is really looking forward to getting back to work. Since the cafe is her only source of income, and if it shuts down, her livelihood will be at stake.

You can support Khushboo by donating here.