On 26th January, every year, India celebrates Republic Day with great grandeur. It is a historic day for Indians across the world. Thousands of Indians gather to commemorate the enactment of the constitution, which came into effect on January 26, 1950. Several military parades take place across different parts of the country and the President hoists the flag at Rajpath in New Delhi.

The constitution is the rule book that lays down the instructions to be followed for the governance of India. On 73rd Republic Day this year, here are some interesting facts about the constitution: 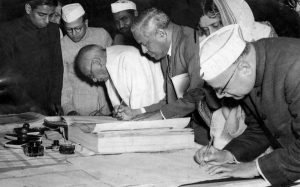 The signing of the Indian constitution (Source: File)

1) The total expenditure incurred to put down the constitution was Rs. 6.4 million.

2) It took 2 years, 11 months and 8 days to complete writing the entire constitution. The Indian constitution is the longest one in the world, with over 1.46 lakh words. It has 25 parts containing 448 articles and 12 schedules.

3) The Indian constitution was never printed — it was handwritten by Prem Behari Narain Raizada in a flowing italic style with beautiful calligraphy. Each page in the constitution was designed with the help of artists from Shantiniketan. The pages are bound together with black leather and have beautiful gold designs on them. 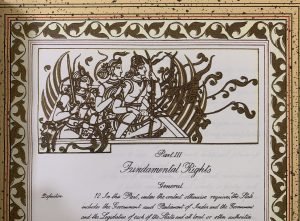 Pages from the original copy of the Indian constitution (Source: File Photo)

4) The father of the constitution B.R. Ambedkar wanted to burn the document three years after the adoption, reportedly unhappy with the document. “Sir, my friends tell me that I have made the Constitution. But I am quite prepared to say that I shall be the first person to burn it out. I do not want it. It does not suit anybody,” he had said.

5) With the adoption of the Indian constitution, millions of women across the country got their voting rights.

6) The constitution already had more than 2000 amendments in its first drift before it was passed for adoption.

7) The constitution has three original copies. All of the copies are safely stored inside a helium box at the Central Library of the Parliament. Each original copy is around 22 inches long and 16 inches wide. 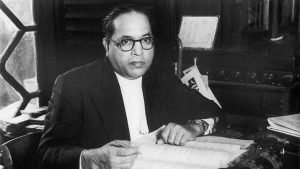 8) The Indian constitution is also called the living document because it can be amended and changed forever. It allows the country to adapt to the changing social dynamics the human race evolves after every generation. Till January 2020, around 104 amendments have been made to the constitution.

9) It is said when the constitution was being signed, it had started raining heavily. That was considered a good omen by all the assembly members who had gathered for the signing. Reportedly, 284 members of the Constituent Assembly had gathered to sign the document. 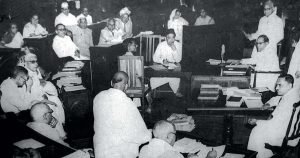 10) Besides being the living book, the Indian constitution is also called the Book of Borrowings. Because the Indian leaders had collected the best parts of constitutions from different countries across the world to write our own.

Like the diversity of India and the plethora of cultures deep within our roots, the constitution makes it infallible to govern India as a socialist secular democratic republic.