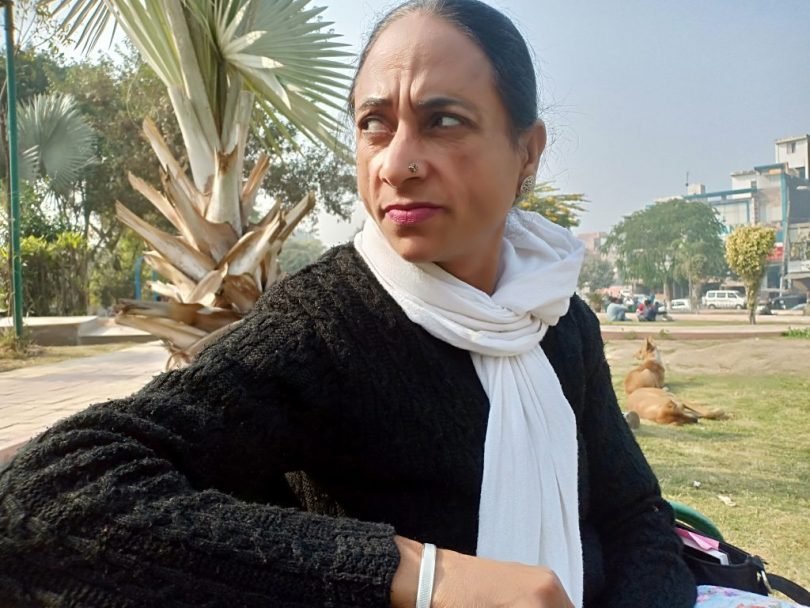 Surinder Kaur from Haryana was just 20 years old when she contracted HIV from her husband. Since then, her life has taken many turns. Today, she is providing crucial counseling to other HIV positive women and has become a beacon of hope for thousands of other women.

It is sub-zero temperature in Rohtak city. The foggy morning restricted even morning joggers indoors, but Surender Kaur, an HIV patient turned counselor, is seen striding towards hospital to meet with other HIV positive patients.

The worried faces of aged women lined up to meet Kaur lit up with a smile as soon as they saw her. It looked like their tension melted for a brief period, even the hospital staff took a sigh of relief.

“This is my daily routine. I go to private hospitals to check with them whether any new HIV patient is recorded in their register and whether he/she needs counseling,” said Kaur. Kaur works with an NGO Saathi and counsel other HIV positive women.

Kaur was merely 20 years old when she had contracted HIV virus from her husband in 1995. Married to a truck driver in 1993, when Kaur tested positive, she was told that she had less than six months left to live.

Her miseries doubled as she was thrown out of the house by her in-laws who raised questions at her character. After her husband succumbed to the illness, she was denied any right in his property.

“The stigma was so huge that no one preferred to speak to HIV positive patients and they were left to fend for themselves,” she said.

Kaur picked up the broken pieces of her life together and embarked upon a journey to transform her life single handedly. Twenty-three years after contracting the virus, Kaur has managed to not only lead a normal life but also has turned into a role model for other positive patients in Haryana.

“I have helped about 10,000 people through counseling not only in Haryana but also from different states. Sometimes I also counsel patients from outside our country,” said Kaur, who is 42-year-old now.

Kaur currently works as a field facilitator at Saathi, an organisation working with HIV/AIDS patients.

Kaur’s work requires her to find HIV positive patients from every nook and corner of the city. After identifying a patient, Kaur conducts counseling sessions and does regular follow-ups through telephone calls and persona visits.

“My job is to infuse the hope of leading a normal life in them. I ask them to trust the medication provided by Pandit Bhagwat Dayal Sharma Post Graduate Institute of Medical Sciences (PGIMS) Rohtak for free,” she added.

Kaur had just finished her school when she got married in Karnal district of Haryana. She had never thought that miseries would start in her life just after 17 months of married life.

“My parents lived in Alwar district of Rajasthan and they were the only ones who accepted me when my in-laws shut the door at my face after my husband’s death,” she recalled.

At a time when the disease had a lot of stigmas attached, it was difficult to find proper medication. The treatment was not available at most of the hospitals and Kaur had to spend 10 years without any medication. In addition, villagers and neighbours turned a blind eye towards Kaur’s miseries. In fact, they often hurled abuses at her.

“I came across many women HIV patients there who were abandoned by their parents due to the paucity of funds to afford the treatment. I have spent several sleepless nights thinking about the stigma,” Kaur said.

Kaur often found herself thinking about committing suicide but her love for her parents helped her survive.

Kaur expressed that all HIV patients from both rural and urban areas have one thing in common; they are subjected to humiliation and ridicule on a daily basis.

“Though the treatment at government and private hospitals are kept confidential but such patients suffer at the hands of family members or relatives,” she said.

The common stigmas faced by patients are that they are given separate utensils to eat, they are barred to use the common toilet and asked to keep their bedding separate with animals in villages.

“There are separate rules for men and women. The latter are vulnerable and are often ridiculed while the former doesn’t see much change in the reputation as long as they earn for the family,” she shared her experience gained through counseling.

Shunted away by landlords, quoting her own example, Kaur said that she was thrown out by the landlords twice for being HIV positive.

“Initially, I did not share about my HIV status with the landlords. Later on, when I opened up to them about my status, they asked me to immediately vacate the room,” she said. In the next house, the landlord got to know of her status through some of her social outreach program and she had to vacate the rented place.

“This is the third place where I am living by paying Rs. 2500 per month but without revealing my status as people start distancing away for no reason. I have learned the things hard way,” she added.

After living more than a decade in gloom and duress of being a diseased person, Kaur happened to connect with Network for HIV Positive People, a Gurugram-based social organisation.

“I was counseled by Jagbir Singh from the organisation who told me about free medication by HACS and I landed in Gurugram. Besides treatment, I was given a job of a social activist to help others,” she said.

She worked for four years there and was paid a remuneration of Rs 4,000. Although small, but this financial and career support enabled a sense of independence in her. Further, counseling other HIV patients helped her gather more confidence.

“I shared my story with the patients and they felt that if she could survive without medication for ten years, then they too can lead a normal life with proper medication. It worked like magic with them,” she shared happily.

Seeing her dedication, she was offered a job by VIHAAN, another social NGO working with rehabilitation of HIV patients.

“I worked with VIHAAN till recently as a field controller to scan the data of private and government hospitals to contact HIV positive people,” she added.

Darshana Rathee (name changed on request) is a mother of two children and lives in Haryana’s Rewari town. She is HIV patient for last three years but has not revealed it to her family members.

She was devastated when she discovered her HIV status but through counseling, she developed to lead a normal life. She still fears that her family may not accept her if they find out about the disease. She hides her medicines and takes them without making anyone else notice.

Amita Devi, another woman from a nearby village faced stigma when she was diagnosed with the disease, but gradually after a lot of counseling, she too learned to lead a normal life.

“People around are so superstitious about HIV patients that they think that even touching and talking to them, may get them infected. Surinder is living example of resilience and grit that HIV patients too can live a normal life,” Amita said.

Dr. VK Jain, nodal officer at PGIMS Rohtak of HACS said that 26,000 HIV patients have registered with them since 2006.

Of them, 6,000 have died while 12,000 are under regular medication. Four thousand of them are about to start their medication from their center.