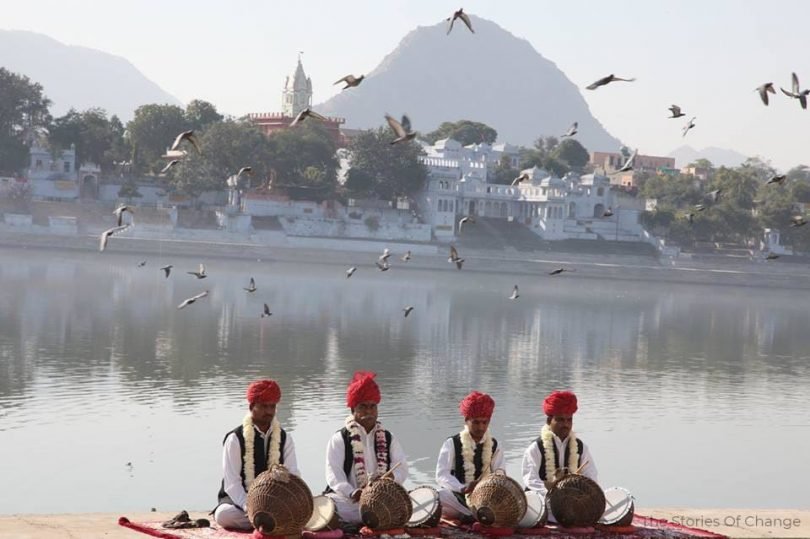 The unsung musicians in the streets Pushkar, Rajasthan share their journey and how they are keeping the folk music alive.

It was a cold Saturday evening in January. Among all those other noises in the streets of Pushkar, a town in Rajasthan, a drum beat was the one that rang into my ears.

Researchers say when we hear a piece of music, its rhythm latches onto us. If the music is fast-paced, our heartbeat and breathing patterns accelerate to match the beat.

So, I followed that beat. As I walked from street to street, it grew louder and louder. I finally stopped at the Pushkar Lake, all confused. I was sure the people playing are somewhere around, but where? On the right of where I stood ‘Gangaur Ghat’ was painted in red on a yellow wall.

In front, stairs ran down to the lake. Barefoot, I went down the stairs, halted, and again went upstairs as I spotted the group. In the half blue sky with shades of pink at its bottom, I sat and noticed that none of them were professional musicians except one who was leading them on the count of four.

I watched the sticks go up and down on the Nagadas. In the middle, sat a man, prematurely-bald, with a thick white mustache, and salt and pepper eyebrows. A CD rested behind the man read: ‘Nathu Lal Solanki’ and ‘Unknown musicians of Pushkar.’

“People ask me to get my cards printed to let others know about me. I tell them I don’t need printed cards. I just need to sit here at the ghat and play. Others will come here hearing me play,” Solanki said.

He said he acknowledged the power of music during his childhood. Born in the famous Bhrama Temple of Pushkar, Solanki started playing Nagadas as his ancestors watched over him.

Thirteen generations of his family had played Nagadas in the same temple. It was thus irresistible for Solanki to not play at all when his parents told him that in the future just playing would not be that beneficial.

“I used to listen to my family play Nagadas in the temple as a young boy. I was not allowed to play, as they feared I would destroy it. So, I took two stones and sticks and began practicing. Later, when I discovered good music can be created from the two stones, I thought instead I’d practice on a metal surface.”

It was a monk who saw him and offered him Rs. two per day to sit and play at the Gangaur Ghat. To date, the monk’s family pays two rupees to Solanki for playing at the ghat.

At the ghat, when others were about to begin with another round of playing, a young boy found a place for himself in the corner and sat. This time he was keeping the count.

He was Solanki’s grandson.“People like me will be born, who will keep this kind of music alive. Only one person cannot do it forever,” Solanki said.

He broke the word Sangeet into two ‘Sang’ and ‘Geet’ and said “Sang k sath sabko gana hai. Tabhi geet banega. (We have to sing along. Then only a song will be created.)”

(You can listen to the entire conversation with Nathu Lal Solanki here.)