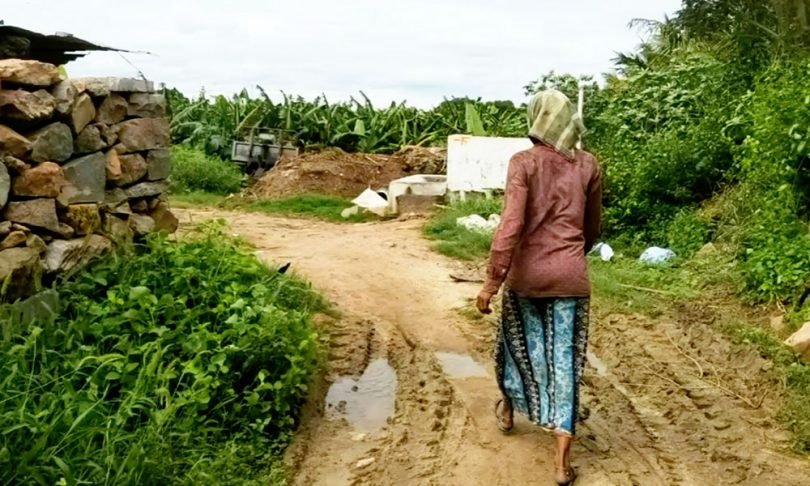 Despite working day and night on their husbands’ farmlands, women in India don’t hold ownership of the land. Women have always been treated as agricultural labors and not the owners. The story explores the discrimination in the agriculture sector in India.

Abirami is a farmer living in Talikote village in Vijayapura district of Karnataka. She is an independent, confident woman who farms on her own land. The woman in question does not have property rights over the land she farms, ever since her husband, Mallappa, passed away seven years ago. As per the Hindu Succession Act, 1956, the property was inherited by Mallappa’s relatives.

Despite facing opposition from her in-laws, she has been fighting for property rights over the land with the village sarpanch. She says: “All my life I have served my husband and his family. I also helped him in farming. If my husband would have been judicious and wished well for me, he would have left at least some part of the land for me, considering that none of my in-laws support me. I am on my own now and I will have to fight for my right.”

Other widows in the village have also joined Abirami in a mutual fight against this discrimination to claim their rights as well. If women owned the land that they worked on, they’d be economically independent and can make them the decision-makers.

This isn’t an exclusive story of one woman. There are thousands of women in India who do not hold property rights. According to the Food and Agriculture Organization of the United Nations’ Gender and Land Rights Database, India is amongst the countries with the most skewed distribution of agricultural land. Women constitute 12.8 percent of the landowners, while they account for 32 percent of the agricultural labor force contributing an estimated 55-66 percent to farm production.

Rami Devi, a farmer from Nalatawad village in Karnataka, said: “Women have been waiting for others to give them what is rightfully their own. Neither government nor any individual man has given any rights to us. My husband doesn’t work. He contributes nothing to the family and yet owns everything we have.”

Eshwari, another woman from Tangadagi, Karnataka, offers an example. She has been farming the land owned by her husband for 15 years, since her husband moved out for work and never returned. She has six children to look after. She is fighting to get the land in her name, like a few other women in the village.

This is a national level phenomenon—as more men migrate to urban areas and non-farm sectors, women’s growing responsibility as workers and farm managers is leading to increasing ‘feminization’ of agriculture, but we are yet to witness a revolution in the property rights’ scenario in India.

These brave, independent women may be exceptions in the society that has clipped their wings. But they are more than just exceptions—they are symbolic of every woman’s fight against the patrilineal setting. They represent millions of women who don’t own land in their name. Women lose many financial services as they are not owners of the land in most of the cases.

Secure and equitable rights over natural resources are globally seen as a precursor to the achievements of numerous global development priorities including poverty elimination, food security, rural development, gender equality, and women empowerment etc. Both central and state governments, over the past few years, have made liberal reforms to secure equitable land tenancy for all. However, India’s record when it comes to providing women equitable access to land is rather poor.

The Hindu Succession Act is an Act of the Parliament of India enacted to amend and codify the law relating to unrepresented or unwilled succession. Section 8 and 9 of the Act deal with the devolution of property in case of the death of a male, while Section 15 and 16 deal with the devolution of property in case a woman dies. The order of succession in the event of a woman’s death gives the heirs of her husband a preference to her own parents. But in the case of a man, his relatives get to inherit the property.

Land activists say that if women owned the land that they worked on, they’d be economically independent which would then lead to a more supportive environment for them to be decision-makers.

Soma Kishore Parthasarthy, a feminist policy researcher, practitioner, and activist, said: “Indeed, having land under one’s name can ensure a woman’s freedom by deterring violence as well as being a dependable source of income. Women who are working as farmers or are engaged in activities like gardening, poultry, sharecropping are still not seen as cultivators, decision-makers and livelihood generators. Land reform in India did not address gender issues—the patriarchal system remains the same.”

“Very little preference has been given to women who are engaged in agricultural activities in the current budget. A small mention of women has been made just in subsidies for chulhas and in Self Help Groups. This is the perceived situation of women in this country and it is far from reality. Women from all backgrounds and regions are thriving and working hard—physically and mentally and they deserve to be recognized and valued. Property rights shall accord them that value,” she added. As of now the studies on land rights relies on the proxy or alternate sources for information regarding land ownership. Many independent researchers have tried to understand the kind of data that is required to address and enhance the policy issues related to land rights of women by examining the National Policy for farmers in India. With the advent of the digitization of land records, tracking gender-based land ownership data can become more accurate and efficient.

Women have always been treated as agricultural labors and not the owners. Titles become the means to access any kind of service and other benefits, like farm loans etc. Women lose these services as they are not owners in most of the cases. The relation between the landowner, producer and head of household is such that all the government schemes in India are for the head of the family. It is required that we recognize the producer other than the head of the household. If producers are recognized, women members will get recognized automatically.