Forest produce from Mahua trees has been helping the remotely located communities to feed themselves amid the crisis. From eating it raw to selling the fruit to earn a few rupees, Mahua trees have been life saviours for the Adivasis in rural Madhya Pradesh.

It was cloudy dawn in the Satpura valley when I started to visit the group of villages in the foot of these mountains. I was headed to such a village named Barasel. The village is an Adivasi majority space and has a settlement of 119 houses. As I roamed in a segment of the Satpura range, I met with many labourers and daily wage workers, who have been marooned by the government and its authorities.

“Government has done just nothing for us. Just nothing. We are landless labourers, why will anyone care?” said Lakshmibai, a labourer who was picking Mahua in the valley.

Mahua: The lifeline of Adivasis

Madhuca longifolia, i.e. Mahua, is one of the most extracted forest produce in central India. Plains in Chattisgarh, Uttar Pradesh, and Odisha have Mahua trees too. With numerous properties, Mahua has been considered a boon for the pharmaceutical and food industries. As the road ran down like a zig-zag line drawn by a Zed black graphite rod on the dry brown paper of the wild forest, the temperature soared and the clock was showing just 9 am. On my way to Barasel, I saw a family picking Mahua in the forest. They walked inside the forest for 20 kms from their village to the location they met me. The trees have started losing brittle leaves which can be seen everywhere on the ground making it invisible. The parched environment was placid that the lowest voice can be heard from far.

“Since the lockdown, we do not have work. Earlier to that, we could earn enough to live. We are picking Mahua to earn a few rupees and gather basic food items like chili and salt,” Lakshmibai, a labourer from Tili Anwli village in Seoni Malwa Tehsil, said. During the summer, hundreds of workers pick Mahua from the forest. They dry the berrylike fruit and sell it to the contractors and, occasionally, to the government. Lakshmibai is one of them. During the lockdown, her routine has been limited to picking Mahua daily from the morning from 7 am to 5 pm in the evening.

No help from the government

“As you talk about money and help of the government, we did not even get the money for the work we had done when the school boundary was built in our village. When the lockdown and the pandemic were not there, even when everything was regular and normal. We got 8 to 10 days of MNREGA works every year. Now that is not there too, we just pick Mahua to at least live,” Lakshmibai said.

According to the Mahatma Gandhi National Rural Employment Guarantee Act, 2005, the state government is bound to provide work to the willing people under the scheme for ‘not less than 100 days’ per year.

As the Chapter II, clause 3.(1) clearly states: “Save as otherwise provided, the State Government shall, in such rural area in the State as may be notified by the Central Government, provide to every household whose adult members volunteer to do unskilled manual work not less than one hundred days of such work in a financial year in accordance with the Scheme made under this Act.” According to the official MNREGA website, the total number of households that reached the 100-day limit were 90,666 in Madhya Pradesh and 38,86,299 households in India. As per the guidelines, the scheme must ensure employment to the poor people. A report published by Financial Express on September 21, 2019, stated that around 22 percent (an average of rural and urban poor) of the Indian population lives below the poverty line. This accounted for nearly 28.6 crore people.

The situation deteriorated due to the fear of the novel coronavirus. As the lockdown was imposed, farmers in the neighbouring villages stopped giving work to the labourers. Some of the ‘big’ farmers had asked their yearly group of workers to stay, yet many were left without employment. The scarcity of resources and remote location made it a hard task to know more about the outer world.

“We were earning Rs 250-300 per day before the lockdown, but now this coronavirus has worsened the situation and we have nothing to do to earn at least a penny. Our only hope is to pick Mahua and sell it to the contractors and the government. This year, the government had set the cost at Rs 35 per kg of Mahua yet we did not get the money on time,” said Rajesh Kumar Sangle, a worker from Barasel. Rajesh is not the only one facing an existential threat due to the lockdown. The pandemic impact was seen pan India from migrant labourers to the people who work in and around their own villages. A report published by Bloomberg Quint stated that the MNREGA works in terms of ‘person-days’ generated dropped to 3.08 crore, which is a staggering 88.8 percent lower than the April last year. However, this calculation is not justifying the number of poor employed. The actual data on the number of people employed is not available as the working of the authorities is stuck.

With respect to the generation of person-days, Madhya Pradesh is among the worst-hit states in India.

Many uses of Mahua

As they could not get enough work to run their homes and feed their children, the Adivasis use Mahua as their saviour and use the fruit in making sweets, vegetables, and eating it raw. The lack of other food items such as vegetables, pulses, and wheat, Mahua has emerged as life-saving gift.

“Aur kuch aata nahi hai, mahua hi hai jisse kha lete hain ya bech kar chatni roti ka bandobast karte hain… karonavirus ne bahut mushkil kardi hai…,” (We do not know anything else, only Mahua is the option left to eat it directly or sell it to earn a few rupees so that we can buy a meal) said Misrilal, another labourer, Barasel. 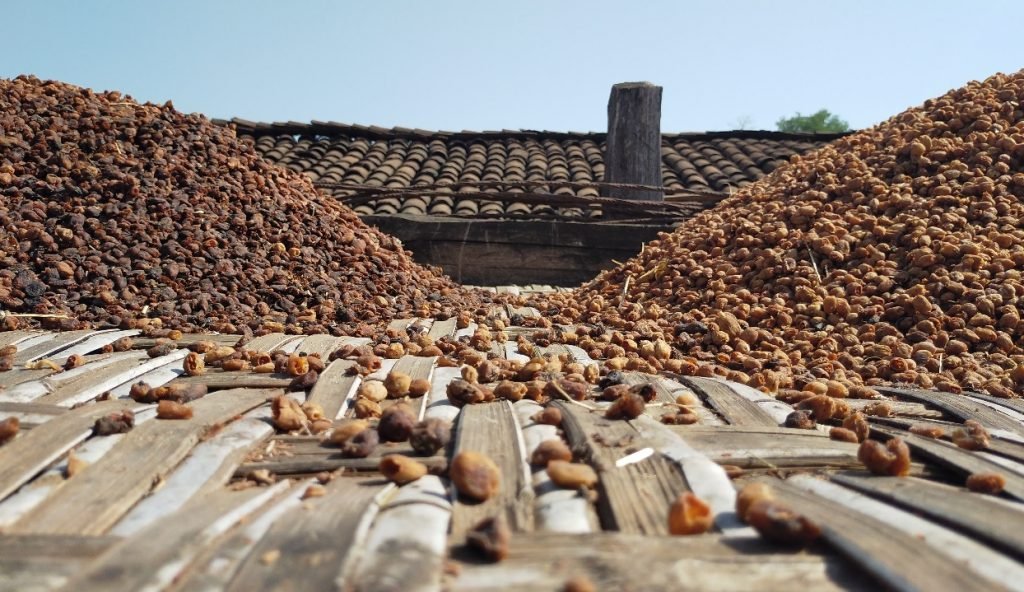 Mahua has also been used in making an indigenous liquor. The liquor sale has seen a steep rise amid lockdown. Though the people were reluctant to talk about the ‘bad habit’ and provide details of the making and selling of the liquor because the practice is illegal. But, as the government authorised shops were closed and the transportation had been choked due to the pandemic, the indigenous liquor (desi daaru) has attracted the people even as far as from 45 kms away.

I visited a hearth wherein every ten days the owner ferment Mahua and make liquor by the distillation process. 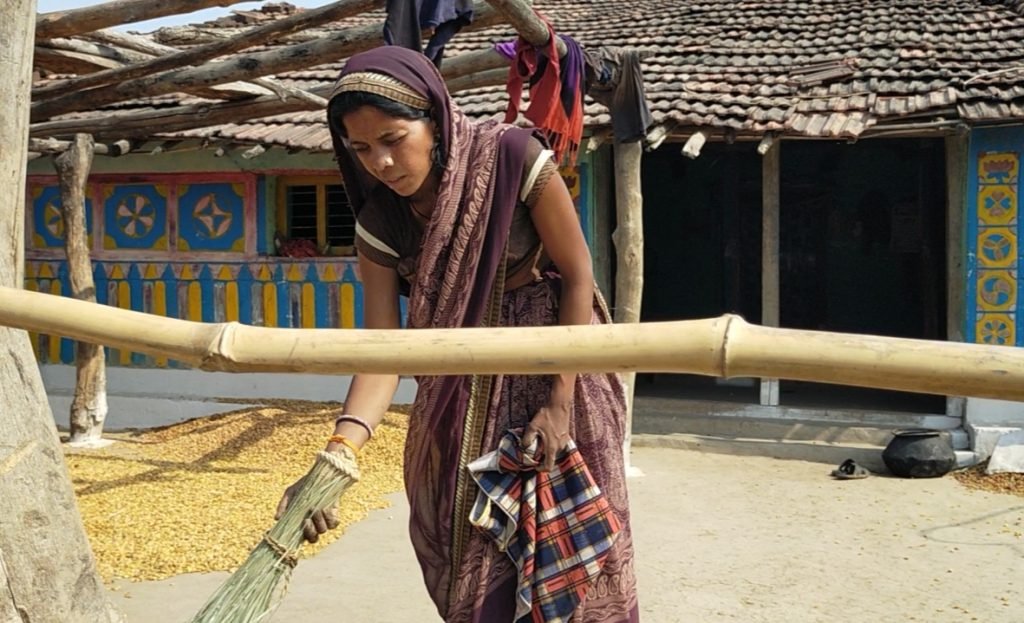 “We do it [distilling liquor] occasionally when we see that the stock is going down. We cannot do it regularly as it is not legal,” a man told me.

“If the time is perfect and you visit the village at the dusk, you will see every household brewing the liquor to sell it,” he added. The contractors buy the fruit at a nominal cost and earn a good margin by selling it ahead. Due to this,  the Adivasis are left with nearly no money.

During the conversation, people just wanted to go back to their work and the regular routine. It implied that illiteracy is among the major factors that the people cannot have a say in the wrongdoing of the others with deep pockets. The houses have been loaded with kilos of Mahua fruit kept on the roof to dry. Later, it will be sold. The mass inside the forest is hoping that the government facilitates the work in a smooth manner so that they could feed their children and family.