Millions of women have been abandoned by their husbands without any explanation in ruralIndia. When even their own families refuse to accept them back, these women have a long fight to win. Here is our full report on the deserted women of rural Tamil Nadu.

The life of every woman in this patriarchal world unilaterally separated from her husband is considered pathetic, irrespective of her background.

An issue that is affecting millions of women in the country across religions and communities yet remains to be addressed is the issue of ‘abandoned women’. Where men simply walk out of the marriage without even uttering any words or completing any other formalities: legal or otherwise.

It is important to address that hundreds of women in India, whatever be their religions and communities, are being abandoned by their husbands almost every day. And these men do not even divorce them; they just leave them without giving any explanation. 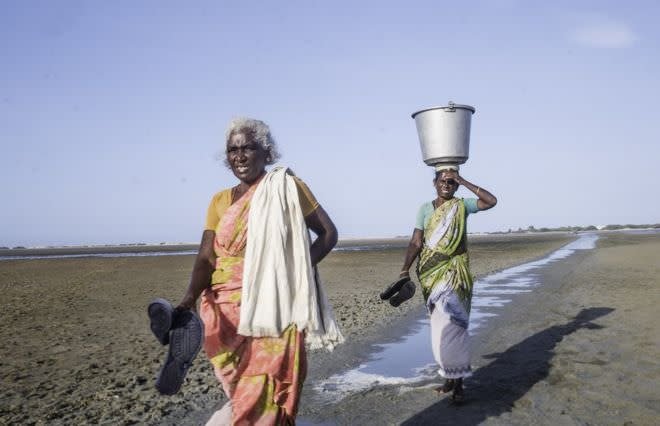 Women go to the market after a small catch at the Nagapattinam beach by the sun comes out.

“There are 2.3 million separated and abandoned women in India, the number is huge, approximately two times the number of divorced women as per the last census. There are close to two million Hindu women who are abandoned and separated; this number is 2.8 lakhs for Muslims, 0.9 lakh for Christians and 0.8 lakh for other religions” (as sourced in The Hindu, dated 04.09.2017). However, no concrete steps could be taken to support these destitute women.

The problem of this scale has its roots in most rural villages as well as in many semi-urban cities of India. Single women face challenges and constraints both in their marital and natal families. The marital home does not support them as their son has abandoned her and the natal home ignores her as she is traditionally considered paraya dhan – belonging to someone else.

They cannot remarry and start another family due to the fact that they are not divorced. Most live in extremely dire conditions socially and financially, and at immense risk of exploitation by others. They are desperate to live with their husbands, waiting for one call from him. Members talking and telling stories about Lakshmi and her life

Despite not living with her husband for over 20 years Janakiraman Amma says that “If he calls once, I will go with him”.

But her husband never responded. Abandoned wives find it difficult to even get a passport in India. For instance, when Jananiraman Amma applied for a passport a year back, her application was rejected for the reason that “there was no marriage certificate or a joint affidavit with the spouse”. She struggled and filed an RTI to get details of her own husband’s passport.

There are many such villages along the eastern coast of Tamil Nadu have limited educational opportunities and here girls are married off before they turn 18, hence their marriage is not registered in court. So, this lack of legal binding encourages husbands to ditch their wives without fear of any legal proceedings. The ratio of such marriages is reflected in the fact that 10 percent of the women who are married end up either abandoned or divorced.

The story of Lakshmi 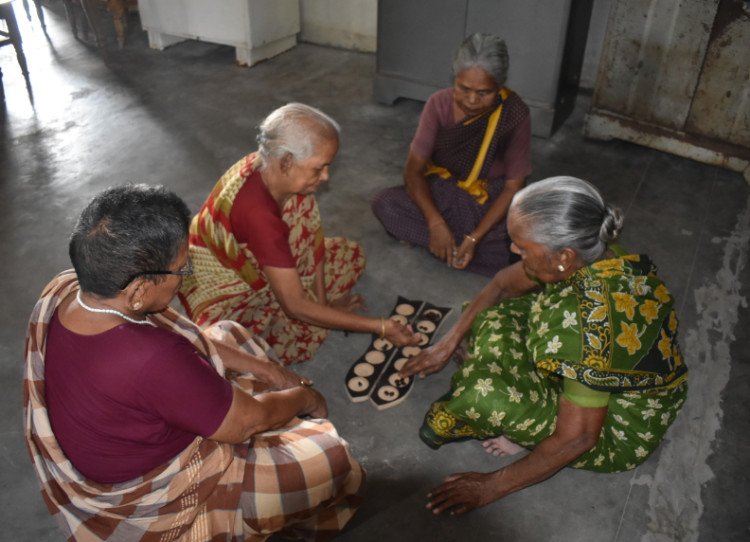 Lakshmi and the other members play Pallanguzhi (a traditional game)

Lakshmi Naganathan, aged 78, was abandoned by her husband several years ago (not known exactly) for another woman without any legal divorce or compensation.

She was married at a tender age of 12 to a man almost 10 years older than her. She was left homeless in the streets of Kumbakonam without any family or relatives to seek help from.

She spent a few days hiding in a cowshed of her parents’ home as she wasn’t accepted back. She did not know that she was pregnant at the time, and within a few days, she went through a miscarriage. “I had never seen so much blood; and the very fact that it oozed out of me scared me for good,” she told me.

She gathered up the courage and started walking, without any direction in mind, in search of work and food to survive. She was quite old and could not work much. She used to work in people’s houses, washed utensils, helped in cleaning their gardens, helped in their harvests, etc. Soon she grew tired of everything and became depressed about her life’s struggle.

“I wanted to end this life somehow. But I knew I should not. I was not the one to blame; others were,” she said with tears in her eyes. Vineetha and her kids

When she was at her lowest, both health as well as morale wise, almost 8 years ago, she was found by a counsellor and was taken to an Old Age Home in Thiruvarur.

She was fed and taken care of in the home and had her morale boosted. “I came here just for food. They told me they will give me food, and so I agreed to come. But seeing the other women here made me realize that I wasn’t alone,” she said and smiled.

She has, since then, been helping other women in the home to grow past their pasts and encourages everyone to live in the moment.

She takes care of a small temple in the home, cleans it, decorates it with beautiful kolams and flowers. She even maintains the garden in the old age home. The staff and the other women call her ‘Kollu Paati’ – meaning the great grandmother – with love. Over the past 8 years, she has encouraged other members of the home to become healthy and fit for themselves. She encourages participation in yoga and garden activities and other activities like knitting, sewing, help in cooking, etc.

Janakiraman Amma talking about her struggle in life

Many women already have babies or are pregnant, but don’t know it until much later when they are left by their husbands. The kids become solely their responsibility as well as their only family they can ever look up to for moral support.

Vineetha says: “My kids support me with everything. I am raising them all as one, and do not differentiate, because they all should know everything. No one knows what awaits them in the future.”

While the marriage of a girl is seen as the most important aspect of her life, the abandoned women receive no respect in society and face many severe problems. It’s high time that the plight of these women is addressed, and the government takes a step to put an end to their exploitation.