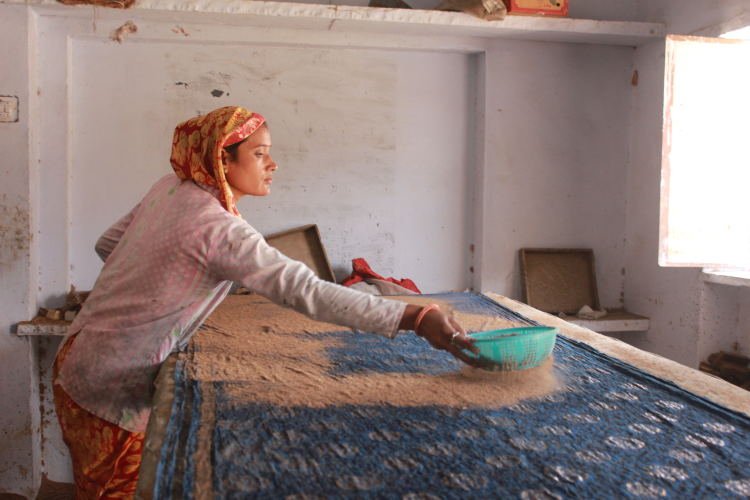 The Chhippa community from Bagru, Rajasthan, famous for traditional hand-block printing is now using social media to give more exposure to their art form. Read more about their journey and their efforts to stay relevant in the competitive market.

It is only in the late evening, barely for an hour-and-half, when 20-year-old Pankaj Chhipa takes a close look on his Facebook feed. He does so looking for comments on his earlier posts. If he finds nothing, he moves to the 200-odd groups on the platform he is part of, and from there, to WhatsApp.

In 2014, Facebook purchased WhatsApp closing a deal for $19 billion. Four years down the line WhatsApp Business was launched to allow small businesses to communicate with customers through the platform. 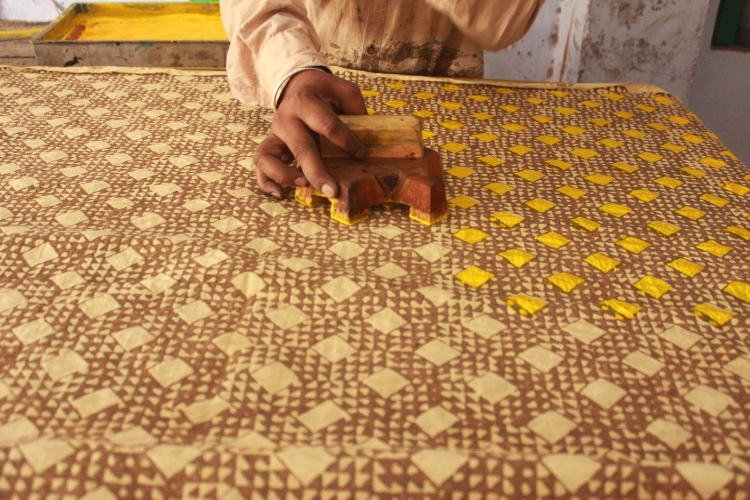 Bhagchand Chhipa doing Dabu printing at his workplace, located at a walkable distance from his home.

India already had over 200 million WhatsApp users by then, and tapping on the emerging market through the platform was a good idea. The figures show that about 81 percent of small and medium-sized businesses in India on Facebook have increased their sales using it.

Additionally, 86 percent of them believe that it allows them to sell their products or services in other cities, states or countries. In a country like India, the two platforms — WhatsApp and its parent Facebook — go hand-in-hand for a businessman to negotiate a deal.

Among those millions of users, Pankaj Chhipa, a small-town boy from Bagru, Rajasthan, is one, who every evening tries to finalise a deal, while curled up on his bed.

The second-year Bachelors in Commerce student belongs to the third generation of his family to carry forward the business of traditional hand-block printing, as a member of the Chhipa community.

A Name That Matters 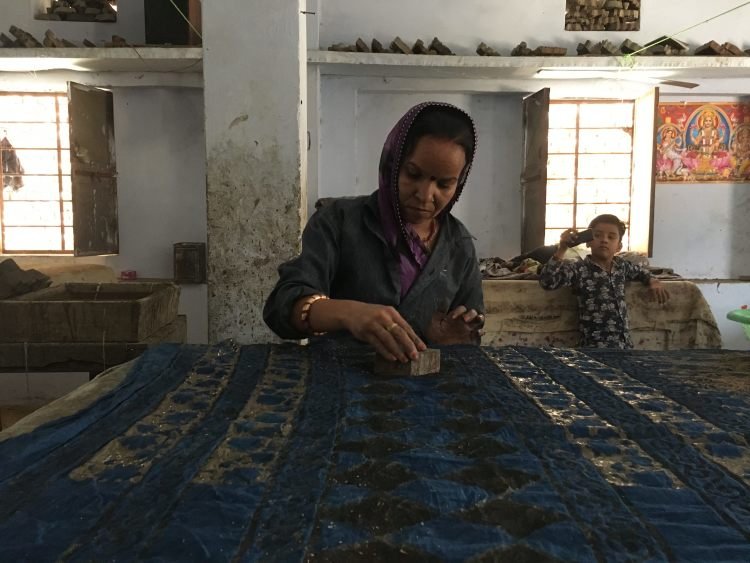 Usha Chhippa printing a saree with hand-blocks dipped in the paste prepared by the family.

“She (my mother-in-law) single-handedly managed to raise four of her children — three daughters and a son. She educated all four and taught them how to stand on their feet. It only happened through the work she chose to do — Chhappai (printing). And soon it became our identity,” said Usha.

The grandmother in her 60’s has retired. The couple now carries on the family’s traditional craft-based business, while their son is indulged in expanding it using social media platforms.

According to the locals, the livelihood of about 90 percent of the families in Bagru is dependent on the 400-year-old craft of Dabu printing — a method in which a paste made with mud, natural gum and wheat husk and organic base colours derived from natural substances such as jaggery, iron, tamarind, alum, indigo and fruit, and vegetables are used.

Also, the wooden blocks used for printing are made in the town. Thus, a town so specific to the traditional artisan business that the community is GI (geographical indicator) certified. However, to no avail. The tag was provided in 2011, while the struggle for the recognition among the rest of the country continued. 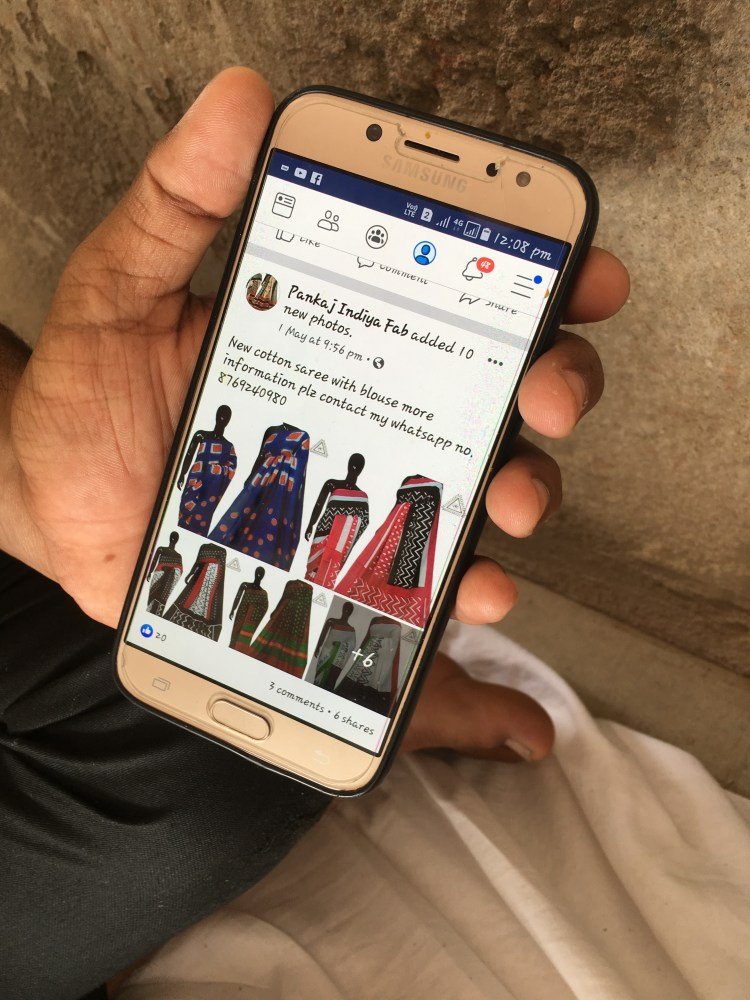 “It is easier to travel to Gujarat from Bagru (50 km away from Jaipur) to show a sample to dealers or wholesalers in the clothing business. But it gets difficult to travel beyond. In India, there are many cities or states which are unfamiliar with our work here in Rajasthan. We want people to know about the work we do here, as it defines the entire community,” said Pankaj.

As internet connectivity in rural India gained pace in the years passed, nearly everyone in the community, especially the young generation, turned to the social media platforms to promote the business.

“I post images of sarees and suits, with Bagru print, on my Facebook Id. In the post, I mention the details about the product on sale and my WhatsApp Business contact at the bottom. I am also a member of some 200 groups, consisting of potential dealers, on Facebook. In the evening when I sit to look at the platform, besides creating a post, I share a similar post in some random 10 groups,” he added. A selection of wooden blocks used by Pankaj’s family for Dabu printing.

He explained, “It depends on the requirement of the customers. If the party is interested they would ask me about the rate in the post or group itself. If they further show interest, I direct them to contact me on WhatsApp. It is worth a try.”

The idea came to Pankaj about three years ago, when his father went to meet a dealer who was then sharing images of the products in his network of customers over WhatsApp and Facebook. His father soon became a part of that network, and he learned the trick. And so does many youngsters in the town.

In the past couple of months, he had placed around 70 orders. The most recent ones were inPunjab to a group of school teachers and Bangalore. “Most of the orders I received are from women living in different cities, not dealers,” he said.

In a month, he manages to earn Rs. 15,000 only through online business. However, he has a strict policy to not make profits over first-time customers.

“A Bagru-printed saree costs Rs. 750. Courier takes another Rs. 100. If it is a first-time customer, we do not make any profit and charges a total of Rs. 850 in the case,” he explained.

The Other Side of the Coin 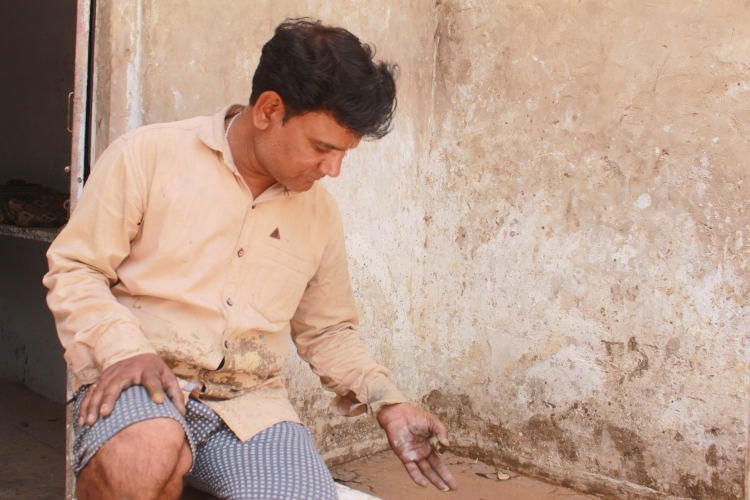 Pankaj thinks it is better for the community to return to the old practice of doing business. “It is always better to show the sample in person rather than sending pictures online. There was a time when we had mediators to settle a deal with a party operating in another city.

It is not followed anymore, and this has put a dent in the business.” He went on and said: “In online when the order is placed and dispatched, there is a possibility that the customer may not like it and asks us to take it back. This is a case of clear loss to us. We pay from our pocket from the buying of the fabric to the courier. On the other hand, a mediator can have a look at the produce and pick out the distorted one to be replaced.” 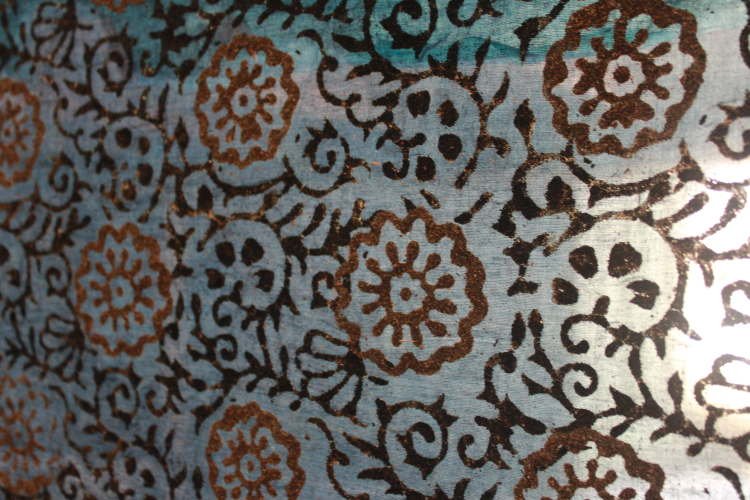 Once the customer selects a product he is asked to make an online payment. There is a possibility that the vendor after the transaction may block the customer on both the platforms. “It has happened,” said Pankaj, “I have received complaints from customers that other people have done it to them. The Bagru police station has also received complaints in the matter.”

Although Pankaj does not entertain such customers, he is certain that the series of incidents had shaken the trust of others in the community. This is the reason why he is not very optimistic about online business anymore. However, continues to do it like his several other friends until it loses its charm.

For now, he is on a tight schedule as he is preparing for civil exams. But still wants to play a role in expanding the traditional business.